Falling Waters State Park is near Chipley, Florida. Of course, you may not have heard of Chipley. It is about 45 miles North of Panama City on Interstate I-10. There were two things going on. First, Tom WD0HBR and his wife Sandy were a "maybe" to arrive from Dothan. The second was I have attained a dog stroller.

I had the stroller in mind for Suzy to go with me when I do RaDAR on-foot transitions, But that was a miscalculation, since I have learned Suzy enjoys those transitions of one kilometer and leads the way. Therefore, I thought I would test out the stroller to transport my radio gear. Indeed it will hold my Icom 7100 portable box and as a bonus it will support the Chameleon Hybrid-Micro Whip antenna.

It turned out Suzy did her own solo transition early. I had tied her with a long leash while I was setting up a a pavilion. There was an empty metal trash can there. Suzy tipped it over and there was a loud crash. Then Suzy panicked and wanted to get away from the can. She got entangled among the picnic tables and slipped out of her harness. Then she was off running full speed up the road. She was not at all interested in stopping. Some park volunteers in a golf cart helped turn her around. It took her a while for her to feel comfortable at the pavilion again but she eventually did.

The next happening was Tom WD0HBR and his wife Sandy did arrive, Sandy is a ham too but she setup to do lace work while Tom and I operated radios. Tom gets amazing results from his MFJ 9040 5 watt rig and about 50 feet of wire. It turned out the best he could do was to run the wire horizontal about seven feet off the ground to a nearby pine tree. Tom worked a SOTA station in North Carolina and later a second NC station. His last QSO was with a Panama City ham Mike K4MTI. I had not heard Mike on the air in a while and both Tom and I worked him.

I had the Icom 7100 box with battery in the dog stroller. At first, I hooked it to a Chameleon Tactical Dipole Lite. supported by a low limb  Due to power lines, I dropped most of one end on the ground. I started on 40 Meters CW and worked K4KHV in nearby Marianna, Florida. I later worked him on 40 meter SSB. The same for Mike KM4ELJ from Panama City. I also worked Bob WB4BLX on SSB in Panama City. He was out portable. I also ran into KE4QEG in Panama City on the 2 meter repeater. He met me on 40 SSB. I heard Jack N1HQ of Panama City who was visiting in Silver Springs Florida. He could not hear me. I moved on to other bands and for the day had a contacts on 40, 30, 20, 17, 12 and 10 meters. It was nice to that the the high bands were open.The 12 meter SSB contact was with John MW1CFN in Wales. Note, I had repositioned the Tactical Dipole leg that was on the ground to a tree. 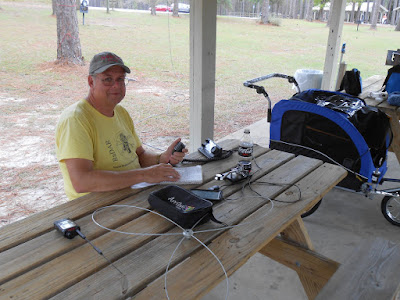 I did some practice motoring around with the dog stroller with Suzy. I am not trying to operate while in motion. I had some issues with RF affecting the rig, I found that moving the 7100 head out to a portable table solved that. I think that a useful thing for the cart is it supports the Hybrid-Micro and the whip. With that configuration, I worked WP4OUH in Puerto Rico on 10 meters SSB. Also surprising I was getting excellent reports from WB4DBO in Huntsville Alabama on 30 meters CW. I also worked Mike K4MTI on 40 meters CW. These contacts were with the MIL whip/whip extension about 18 feet long. Then for fun I tried the whip about seven feet long and the Chameleon top hat. I worked Igor W0O in Frankenstein, Missouri on 20 CW. Now that was sweet since it was Halloween.

Tom and Sandy went on the trail to the falls. It was just a trickle due to the dry weather. However, Tom, Sandy, Suzy and I had a great day at the park with comfortable weather.