It is my estimate that forty-six years ago I got my start in Amateur Radio in my home town of Dothan, Alabama. I had been listening to CBers in the neighbourhood on a Knight Kit Star Roamer. I said "Dad I want to do CB radio." My Dad said "No you don't, You want to be a Ham operator." My Dad was not a Ham, but avid kit builder in those days. He built kits from the stereo amp and FM receiver up to a large HeathKit projection TV. He had a friend at his work Mr. Snellgrove who was a Ham. Mr. Snellgrove gave me the Novice Class in his home  He also loaned me a transmitter that had plug-in coils and many crystals. Over the next few years, the yard had a everything from Hygain 18 AVQ vertical, to a tri-band two element quad. I credit this technical hobby with launching a career in Electrical Engineering. My Dad's and Mr. Snellgrove's help has had many returns.

So forty six years later I do enjoy a visits with Mom and Dad who live in the same house. I usually get an hour of on-the-air time there from my Dad's workshop. Today, I worked Steve WA5FRF in San Antonio who related a similar story. about his Dad and his career. We both hope amateur radio can play a similar role for other teens out there.

I have an antenna in the yard that takes advantage of the high pine trees. It was originally an off-center-fed dipole with a balun. The improbable ice storm last Winter brought a limb down that destroyed the balun. So now it is fed with 300 ohm line. I use a SGC 237 balun to match the 300 ohm line to coax. I am very pleased with that arrangement. Today, I had a good string going on 20 SSB. It  included Texas twice, Illinois, Kansas, Oklahoma, and Missouri. Yes Ham Radio still is great fun even forty-six years later. Thanks Dad! 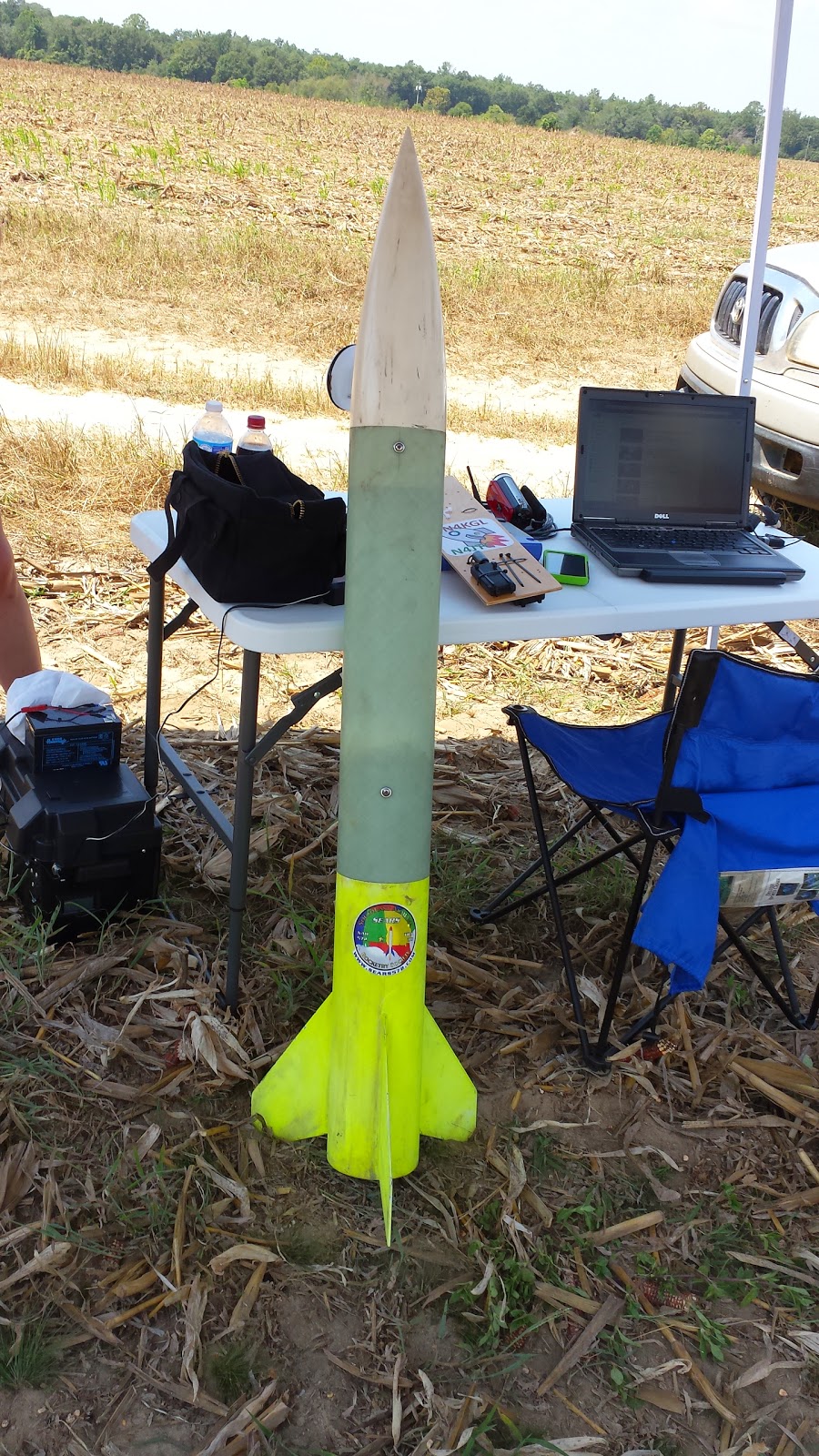 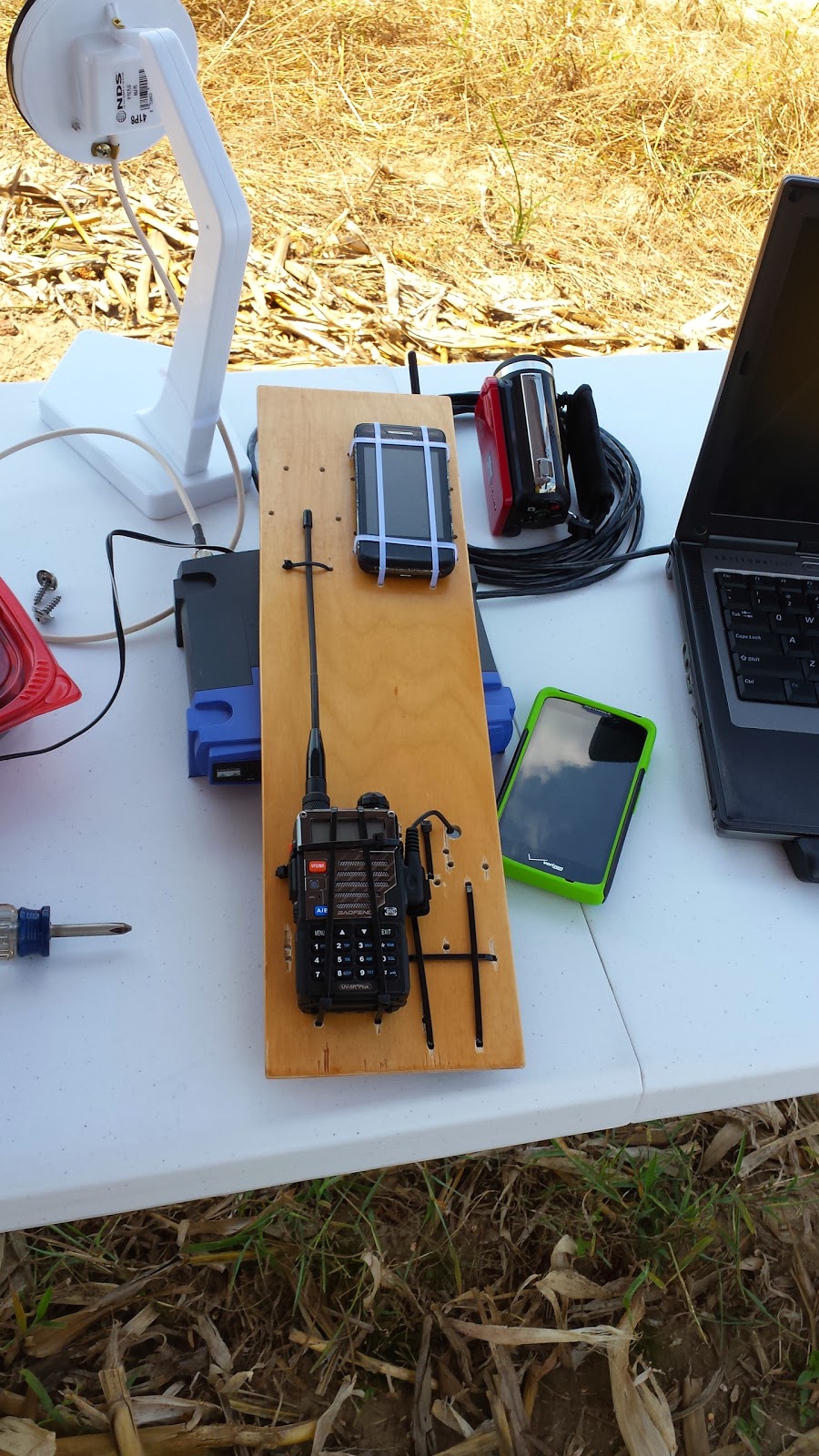 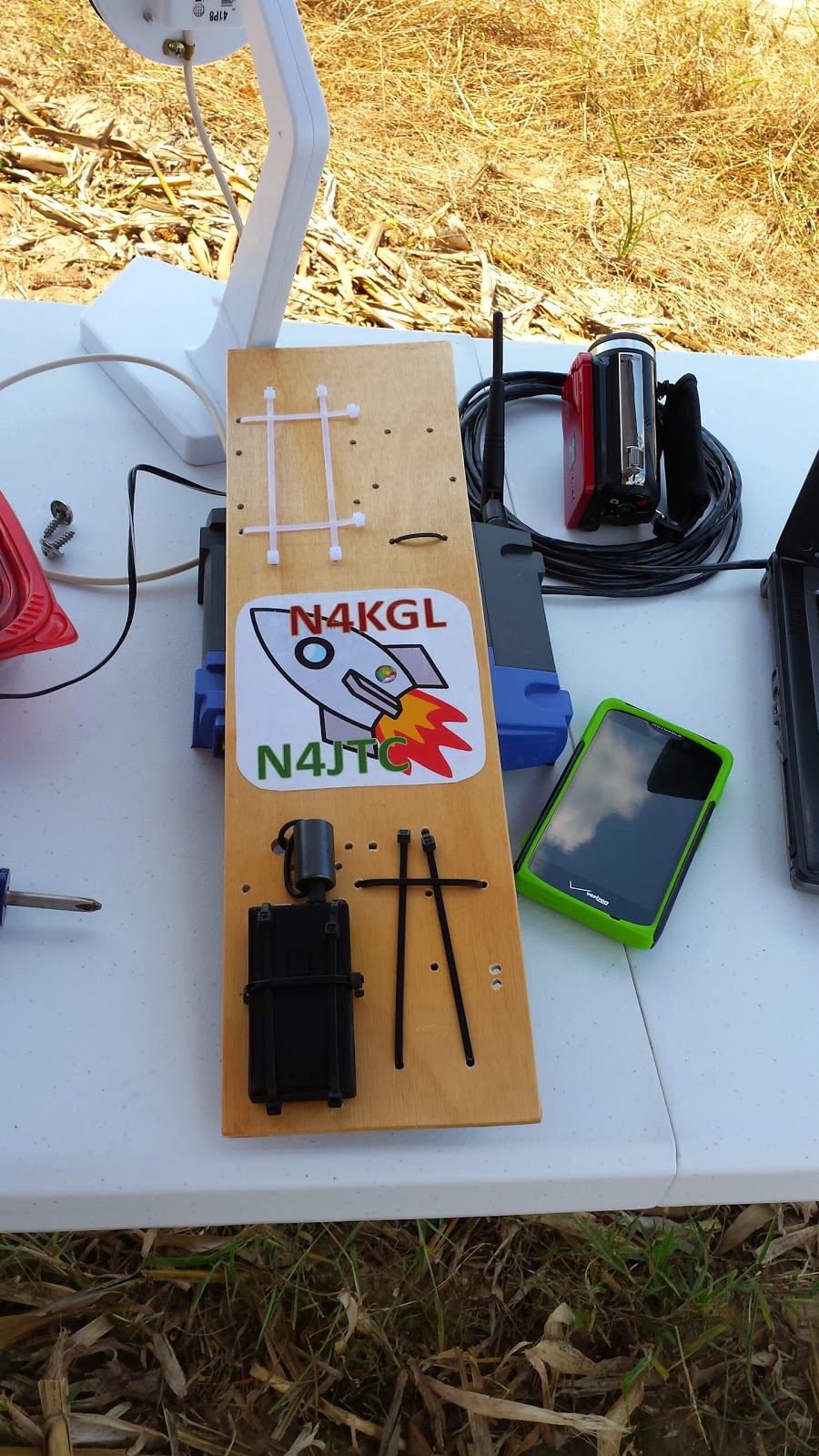 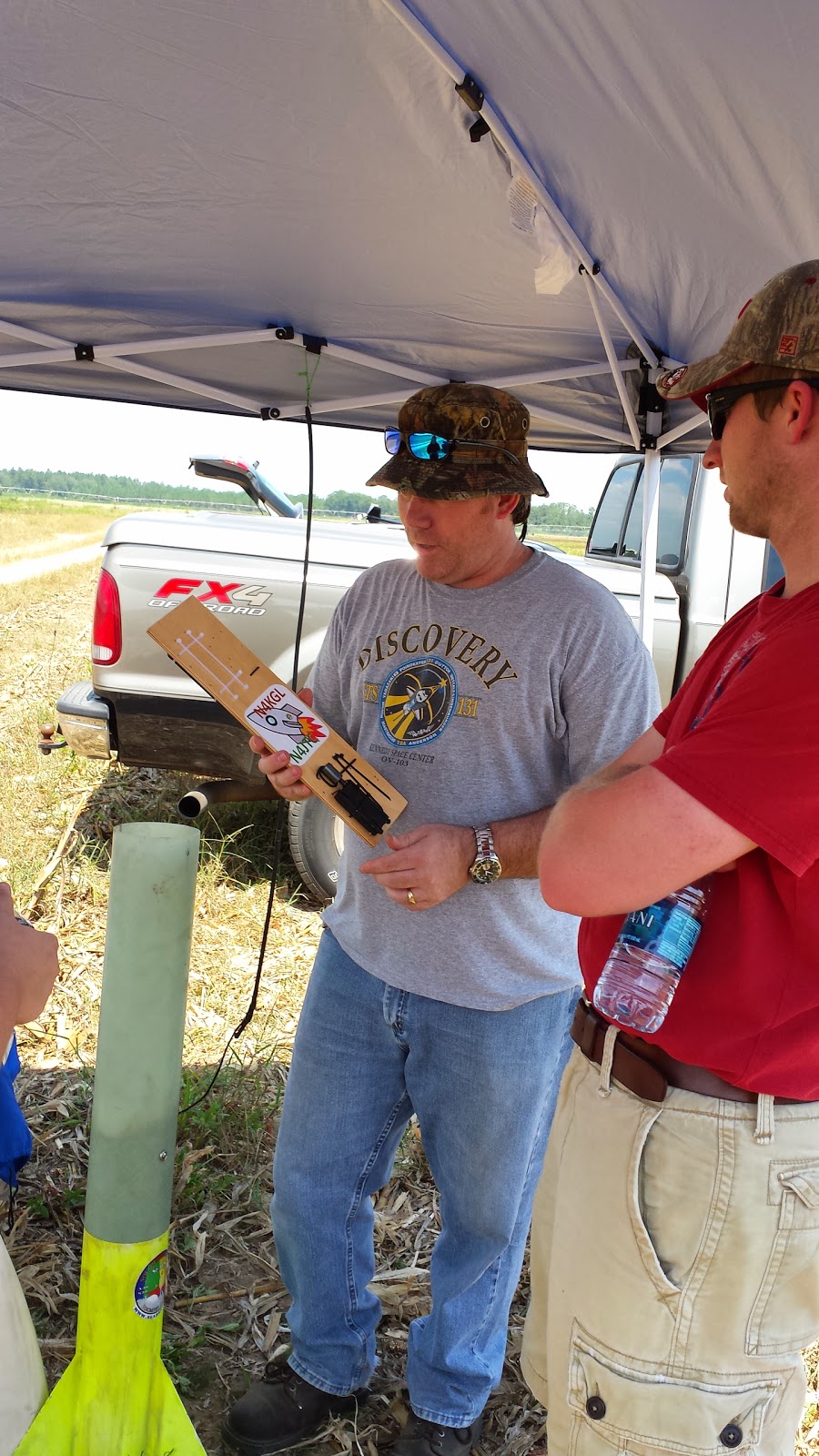 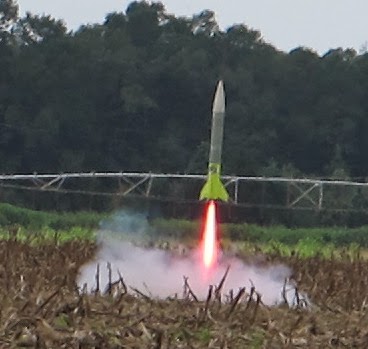 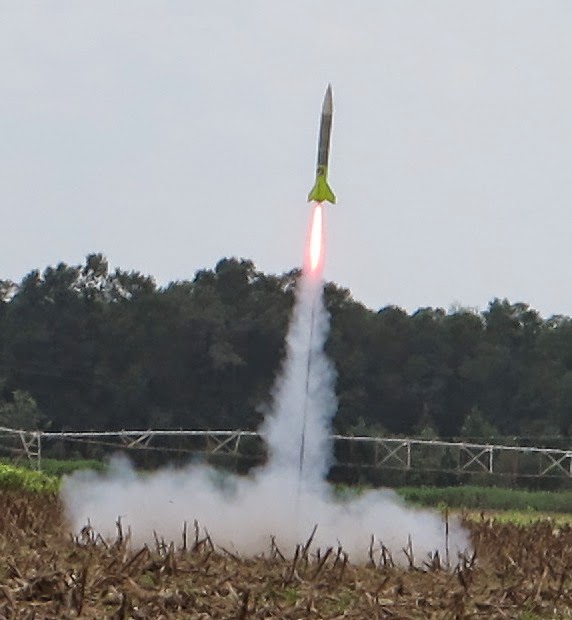 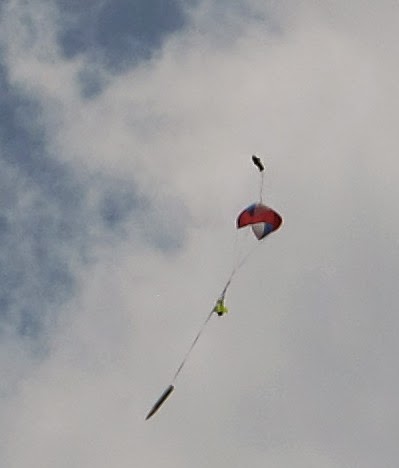 I decided to participate in the NJ QRP Skeeter Hunt using the RaDAR protocol. Namely, I made 5 contacts and then took a one kilometer walk. Hey should we not mix some exercise with our hobby. This reminds me of the Biathlon in the Olympics. "Biathlon is a winter sport that combines cross-country skiing and rifle shooting" according to Wikipedia. The duration of the Skeeter Hunt is four hours which corresponds with the RaDAR contest. So this is good training for the November 2014 RaDAR contest coming up.

So me be N4KGL Skeeter number 85 in the 2015 Skeeter Hunt. Easy, I will just head for the park in Lynn Haven Florida. Not quite, Mother Nature blessed us with a downpour almost a flood. It took the first hour to wait it out and get situated. I had chosen the KX3 and Alexloop as the gear of choice to deploy, operate, pack up, carry on my one kilometer walk and redeploy again. You won't understand the fun in this untill you try it. I also made use of a beach cart. I rolled it down the streets of the neighborhood to get my one kilometer done. This time I just returned to the same spot to operate.

So now the details. The first station I hear and work was Larry W2LJ the infamous Skeeter 13 in New Jersey. This was on 20 CW. The second station was buddy Craig NM4T in Alabama. He heard me but we did not complete the exchange. I finished out the first five with K9DAX NR 78, W3BBO NR 3, Wa0ITP NR 14 and KG3W NR 17. The first five only too 20 minutes. Now it was time to pack and walk.

Returning to the air after the walk I wanted to mix it up with some 20 meter SSB. I got two Maryland QSO Party Stations N3FJP amd WG3J. The latter was running 1500 watts Hi Hi! Back to 20 CW, I seemed to be out of sync but got WA8REI NR 26, N0SS NR 66, and AI4SV NR 63. At that point it was the last hour. So better get with it. I packed and repeated my walk.

Returning to the air it sounded like the Skeeter Hunt was over on 20 meters. That had me worried but kept going by heading to 15 meters SSB. I ran across a local testing his rig. Booming in of course, it was WA4AMT a few miles away. Down on 15 CW I got WA7NBG in Arizona working SKCC WES. Less than 10 minutes left. I admit it Bob KK4DIV had been sitting with me for a while he deployed in the park with his FT 817 and yes that was the last contact.

Well last year I was Skeeter portable in Dothan Alabama and only got a dozen contacts. This year if you are counting I got thirteen. Considering losing the first hour and about forty minutes on RaDAR walks it was not too bad for QRP on the Alexloop. I did work a few non skeeters and talked them into giving me their power. Of course, by the time this was over the sun was out and it finished as a beautiful day here in Florida.

If I lost you on RaDAR, it is Rapid Deployment Amateur Radio. Now if Larry W2LJ would go for a RaDAR category with 10X multiplier my chances in the Skeeter Hunt would be good.

Today was the the August RaDAR On-The-Air Meetup. This is an opportunity for the RaDAR Google+ community to work each other often from portable locations. I also invited our local members of the Panama City ARC. The location was a local park in Lynn Haven, Florida.

Club member, Bob WB4BLX, started early setting up a doublet and his rig.  He checked into the North Florida 3950 net and later checked into the Sunrise CW Net starting at 8 AM CDT everyday. I setup a 100 foot Delta Loop fed at the bottom center. The loop was on the fence line for the soccer size field there. I ran a seventy foot run of coax to a covered area to beat the sun. I did not anticipate that we were going to be joined by 85 kids doing their football workout.  The parents made some QRN but they got a taste of ham radio also. Over the course of the morning it seems we were joined by about a dozen club members.

For a radio, I took the easy way out and used the Icom 7100 go box. So my output power was between 50 and 100 watts. I checked into the 3950 net and the NCS did not copy well but I had a relay from local hams. I got a great report checking into SCARS on 7.251. I picked up W4RPS Troy in Basset, VA on 14.056. Then back to 40 and checked into the Sun Rise CW net on 7.123. My first RaDAR contact was Don KK4QAM in Sweetwater Alabama on 40 meters SSB.  One more 40 meter contact was KA9ZAP in Paris, Tennessee. So I will give the delta loop a thumbs up on 40 meters. My next contact was with RaDAR community member Myron WV0H who was portable in Colorado on 14.059.  Bob KK4DIV brought out his FT 817 with a nice whip antenna and did pedestrian mobile. I copied him 60 db over S9 for our 20 meters SSB QSO. So including Bob KK4DIV, that was three RaDAR Community Contacts.

This was not quite the rigorous RaDAR deployment, but this time of year it is perhaps safer to be lazy. Enjoy the photos below.