What does Sputnik have to do with it?

While we are talking about beacons, Sputnik's four whip antennas formed an angle of 70°. Two were 2.4 meters long and two were 2.9 meters. The radios transmitted a signal that alternated between 20.005 MHz and 40.002 MHz, spending 0.3 seconds at each frequency. If the whips were used in pairs the short set would have been resonate at 29.5 MHz and the long set at 24.5 Mhz. I'd love to see the hookup. Learn more about Sputnik and the role Ham radio played at this link.

I tested the end fed half wave with the toroid transformer from the driveway today. The high end was 24 feet up. I worked K3Y/2 SKCC special event station using 2.5 watts. I got a 449 report. He was 910 miles away in Tuckerton, NJ.That is about par for QRP. So I am thinking this arrangement is good enough for the beacon rocket. There really is no way to know the impedance while it is airborne I just want to be as good as I can be to the transmitter.

I wound the FT-114-43 toroid with 4 turns on transmitter side and 32 on the antenna side. I setup a sloping half wave with the high end 24 feet high. I could not get the SWR down and the noise bridge had the R near zero. So I started taking off turns on the antenna coil and the SWR got better and better until 19 turns it was about 1.5 to 1 then I shortened the antenna a bit and it went to 1 to 1. This might be a mirage but I'll take it. So I might try to make some contacts with this wire and see if it is an antenna or a dummy load. With the 4.75 ratio I ended up with that would say the antenna has an impedance around 1200 ohms. I did all this testing in the driveway and I may have gotten a couple of passer-bys interested in ham radio. 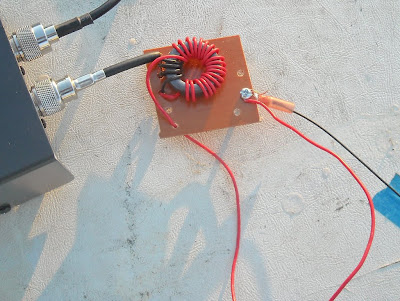 I discovered the Reverse Beacon Network today. I hope it copies the N4KGL Beacon when it goes airborne. My question is: Do you have to call CQ to be skimmed?

I also have the FT-114-43 toroid in hand now for the antenna coupler. I got great service from kitsandparts.com. They are the "Toroid King".

I found this link that describes an alternative approach for matching the transmitter to an end fed half wave antenna. Since it was used for the IHAB-2 20 meter balloon beacon I think I am on the right track. It uses a transformer wound on a FT-114-43 toroid. This will get rid of the Par matchbox, coax, right angle connector and so forth. That will be lighter and will fit in the body tube. So I'll send off for the toroid. Much better!

All this was a last minute effort and lacked adequate notice to anyone to arrange to hear the beacon. As it turned out the winds were high all day at the Samson, AL launch site Saturday and not a good time for launching a marginally powered rocket. I did some ground checkout with the beacon and through flexing the coax on the outside it pulled the center conductor of coax out of the transmitter board. However, the PA was forgiving and it still works. So I can do some tweeking and perhaps build a booster that is compatible with G motors. The next SEARS launch is February 5th.

My first try at a beacon rocket is ready. The 1 watt (powered with 9 V) 14.060 MHz transmitter, ID-OMatic II identifier board and a Par Endfedz match box have been assembled into the payload of a 2.2 inch diameter 5 foot tall rocket. A 33.28 foot wire half wave at 14.060 MHz will trail the rocket. The rocket will be powered by three D12-5 motors. The weight turned out to be 1 lb and 13 oz. The thrust of 36 newtons will be a 4.5 thrust to weight ratio. I would not launch with any less. So it looks like a replacement booster with a G77 motor would be a good idea for the future. I will head for the Southeast Alabama Rocketry Society (SEARS) launch in Samson, AL in the morning. If it is not too windy I'll do a first flight. I will post some QRPSPOTS messages giving about a 30 minute notice. I will also be on during the day operating as N4KGL /4 with 3 watts around 14.057 MHz. The rocket beacon will identify as N4KGL/B and be on 14.060 Mhz. Trailing a wire from my rocket is new territory so we will see what happens. I consider this a real challenge for reports from other hams as the flight time might be a only couple on minutes. But please give it a try.


Yes that is a 9v battery taped to the outside. It will be taped better for launch. It balances out with the coax right angle connector on the right. Of course the drag will reduce the altitude a bit.
Posted by N4KGL at 9:03 PM