Saturday happened to be the W/VE Islands QSO Party sponsored by the US Islands Award Program. I decided to combine an expedition for the QSO Party with a NPOTA activation of the Okaloosa Island unit of the Gulf Islands National Seashore. A "twofer" you can say. This is a little over an hour from Panama City, just west of Destin, Florida. I am still having a problem with the Icom 7100 that started on Field Day. Therefore, I decided to take the Icom 7300 out instead. I operated 40 and 20 meters using the Bravo 7K vertical. I got some pretty good reports with the antenna about 50 feet from the saltwater bay. The rough contact count is about 45 contacts with most of them from NPOTA chasers. I did work an island in Georgia on 40 and one in Virginia on 20. I also sent an APRS message to Bob KK4DIV to satisfy one of the NPOTA Five Star Activator criteria. APRS messaging is very new to me but it worked using a Yaesu FTM-100DR rig. This is my fourth SS08 activation from this site. I did two other SS08 activations from Naval Live Oaks further west.  This National Parks On the Air is lots of fun and I hope to take advantage of it for the rest of 2016.  Checkout the videos including the one by Bob KK4KIV who received the APRS message. Thanks for the help Bob! 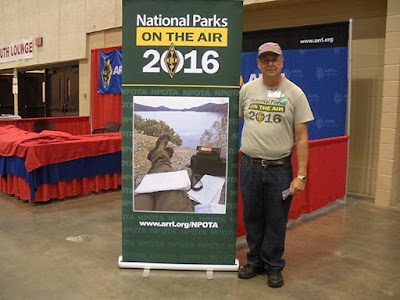 The Second Saturday Sprint and NPOTA Activation on Okaloosa Island

It was a worthwhile trip to Okaloosa Island near Destin, Florida on Saturday. Several events came together including:

My setup was under a scraggly pine in the picnic area. I ran 100 feet of coax to be closer to the bay on the North shore of the island. Prior to the sprint, I worked W4RYZ, K4LIX and N4VSP back in Panama City, Florida.  At 2 PM on 40 CW I worked Kelly K4UPG #105 in Tennessee, followed by W4RYZ again and Tom WD0HBR in Dothan, Alabama.

On 20 CW I worked K0RGI #101 and founder of the Second Saturday Sprint in Wisconsin. Next I worked Pat N0SHU #102 in Missouri. A few minutes later I worked Kelly K4UPG #105 again on a second band. Previous Sprints were hit and miss for the members but working Kelly, Pat and Jim on the same afternoon was lots of fun.


I got a NPOTA run going on 20 SSB it started with Jim K0RGI. The run lasted for 24 contacts. Then the sprinkle of rain got heavy and Suzy and I packed up quick. That was about 20 minutes before 4 PM.

The SO-50 Satellite pass was successful got at least one contact. I am still working on a level of comfort to get the calls in my head, adjust the antenna, and the rig all at the same time.

All in all quite a day at the park and on on the radio. Suzy and I enjoyed the sunshine while it lasted.
Posted by N4KGL at 2:13 PM

Pedestrian Mobile with the Elecraft KX2

I believe Wayne N6KR of Elecraft realized a life-time dream with the introduction of the KX2 ultra-portable. We thought the KX3 was small. The KX2 is small enough to hold in your hand like like a Handie Talkie. In fact it is an HF HT. I have been using two whip antennas the MFJ 1820t for 20 meters and the MFJ 1817t for 17 meters. I also use a 13 foot drag wire.with both There is a mini banana plug socket on the rig for ground. If the drag wire gets yanked the plug will pull out.  Beyond the antenna there is a built-in microphone. So plug in the whip and the drag wire and you are ready for SSB Pedestrian Mobile. Today, I used a key strapped to my belt to do CW. The controls are in the natural spot to tune and do PTT with your thumb.

Suzy and I have been taking walks in the neighborhood and have managed a contact most times. Today, I went to a near-by park and did pedestrian mobile on 17 meters. I copied my friend John W8JER in Michigan. John heard me but I got drowned out by QRM. My CW contact was with Mike KM4ELJ. He was about twenty miles away.

It is a nice kind of freedom to go pedestrian mobile this quick and easy. Did I mention that the internal Li-Ion battery will last 5 to 8 hours. Consider this rig for pedestrian mobile and of course the traditional portable ops. This is a dream come true Wayne!

Flight Of The Bumble Bees 2016

The Adventure Radio Society Flight of the Bumblebees is a four-hour event held annually on the last Sunday of July. It is open to all radio amateurs. The Bumble Bees are portable stations operating QRP (5 watts or less) and using CW mode (Morse Code).

This year like 2015 I went to St. Andrew State Park near Panama City, Florida. My BB number was 62. I got my favorite picnic table right on the Grand Lagoon. I put a Chameleon Hybrid base and the whip plus extension up right on shore. We will take any help we can get from the saltwater effect for verticals. Suzy was my buddy like last year.


I had almost exactly the same number of contacts as last year. 38 total of which 32 were on 20 and 6 on 40 meters. 25 were fellow Bumble Bees. This was a hunt and pounce effort for the most part. I did work WB4BLX, K4GXV and the club W4RYZ (Bob WB8PAF operating) who were local. I also worked Jim K4LIX was local and also a Bumble Bee.

This year I used the new KX2 instead of the KX3. The nice thing is the KX2 internal battery lasted for the whole four hour event. This eliminates the external battery. This event shows what can happen when the QRP ops show up. The conditions were not as good as last year due to the waning solar cycle. I didn't hear anything on 15 or 10 meters. Even with the oppressive heat and humidity, this is still a fun event.