Well I had a big day QRPing Saturday with the QRP To The Field (QRPTTF) contest. I was Parking Lot Portable (PLP) behind the Mother-In-Laws condo in Conyers GA.. You could be Home, Yard or Field and I counted myself as Yard even though Conyers is not my home QTH.

I started out on 40 meters with the Buddistick on the mast. I decided to use the Icom 703 with the full five watts this time. I worked a few stations before the 11 AM contest start.  I was very pleased to run into K4MTI Mike Kirby in Panama City just by luck. He gave me a good signal report. My second contest contact was Kelly K4UPG from Orlando. I call him a QRP neighbor. QRP neighbors for Panama City are pretty sparse. Signals were good for mid-day and the states were FL, FL, OH, AL, GA, GA.

So I decided to go to 20 meters and it was nice there as no other contest going on.  I used the Hamstick dipole on the mast for 20. I was very pleased to work WG0AT for the first time. Steve is one of the more famous hams due to his Rooster and Peanut goat videos on YouTube. So the SPCs were NY, OK, ON, CO, NJ, TX, SK, NV, VT, MN, TX, MA, WI, PA, NH. I think the SK in Canada was the longest distance about 1500 miles.

Then it was back to 40 meters. I worked Dave AB9CA/4 another QRP neighbor.  He is in Loxly AL near Mobile. I worked him twice on 40 as the upper part of the band counted as a different band. The states on 40 for the wind up were AL, LA, AL, VA. The band was a mess after dark with RTTY and lots of stations but, they were not doing QRPTTF.

My first and only ISS contact was with CDR Doug Wheelock on 8/29/10. Since I got an invite to hear Doug talk to students in Ashford AL on April 14th. It was a great opportunity to hand deliver the QSL for the contact. Doug visited a number of schools in Alabama and also was on the Rick and Bubba show. 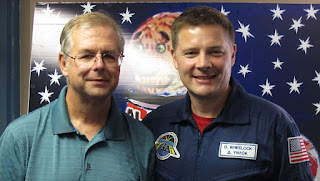 CDR Wheellock gave a great talk for Ashford students. He said your math problems you do now give you problem solving skills you will use later in life. While Doug was the Commander on the ISS they had to solve a serious cooling pump problem. It took three spacewalks to resolve. And even with that challenge Doug took time to make contacts with schools and hams from the ISS.
Greg
N4KGL
"CDR Doug Wheelock Astronaut"
Create a free slideshow with Picnik!
Posted by N4KGL at 10:55 AM