It took a while for me to try 60 meters. I needed to get my antenna working there and setup memories for the KX3. There are a few new twists for 60 meters. First is the channelization. See this ARRL link. There are five channels. For SSB you setup for 1.5 Khz below the channel center. For CW you setup on the channel center. So for the KX3, I setup five memories for SSB and five for CW. Note power is limited to 100 watts with a dipole. If your antenna has gain over a dipole you must reduce your power for equivalent ERP. That is no problem here as I run 10 watts SSB max.

For QRP SBB I had a mindset that it would be a challenge to make contacts. Well I found this not to be the case on 60 meters. I have had no problem and getting out and about half of my contacts have been QRP to QRP. Notable is Larry K5ZRK in Mississippi running 3 watts and being received well over S9 here. I also worked  Sonny WB4NKU in FT Valley GA and Bobby AK4JA in Newnan GA both running QRP. It seems Channel 2 is is a QRP gathering place.

Just an aside, I met Larry K5ZRK at a hamfest in Milton FL several years ago. He was enthusiastic about QRP and in particular 60 meters. So when I finally got on 60 meters I ran into him quickly. He has many accomplishments on 60 QRP including WAS and lots of DX. He also gets on 30 meters CW. Another small world story is that I discovered Bobby AK4JA was at Monte Sano QRP event back in August. It turns out he operated my KX3 in the event there. I also ran into NX4E Jim on 60 meters. He is in the Bear Creek community just North of Panama City. I had never run into to him before although he is a local ham. Checkout www.bearcreekfelinecenter.org operated by Jim and his wife.

Due to the channelization, stations take a pause to check for others wanting to join in a round table. So courtesy prevails. Likewise, CW shares the same channels. We will see how that goes. I have heard some CW and look forward to working both modes. It will be interesting trying 60 meters QRP portable. Sonny WB4NKU says there are a number of stations operating 60 meters QRP portable.

We had a good Christmas in Columbus, GA. On Wednesday it was too cold to operate in the backyard. So I setup the Alexloop on the coffee table. I had good luck on 30 meters working W4PKU in VÀ and AC4FZ in NC. I squeezed out a 40 meter QSO with WD5CNC in AR. The radio was my KX3 running 5 watts on internal batteries. I enjoyed the pets there including Duckie in the photo below. 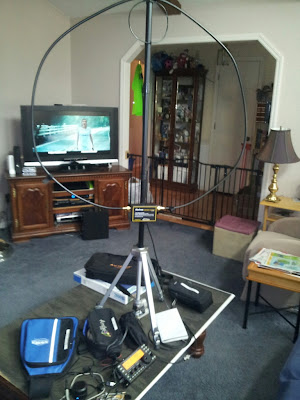 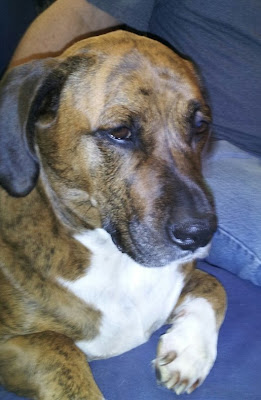 Sunday on the Radio

Sunday, December 16, was a nice opportunity for operating QRP CW at home in Panama City FL. There were several events including the ARRL CW Rookie Roundup, The ARCI Holiday Spirits Homebrew Sprint and the Flying Pigs Run For The Bacon RFTB Sprint. In the RR I worked several true rookies licensed in 2010 and 2011. It is good to know that rookies are taking up CW. The Homebrew sprint gave me an excuse to use two of my QRP kits, The Wilderness SST and Sierra. I am proud that I built these radios and they do a great job. I rounded out the day by working 10 Flying Pigs using the KX3. By the way Wayne K6KR now with Elecraft was the designer for the SST, Sierra and KX3. Note I almost scored KS4L Randy in Huntsville but he could not pull me out in the Homebrew Sprint. He was running his Elecraft K2 Kit.. The new wrinkle was http://ham.jit.su/

I followed the Flying Pigs with it. I could see when they went from 40 to 80 so I could go chase them.

The Straight Key Century Club Seventh Anniversary Celebration will start January 1st. There will be K3Y stations on from the ten call areas for the entire month of January. Note the call K3Y represents "Key".  I am signed up to be K3Y/4 during January 1st and 21st from 1400 to 1759 UTC. So I will be the chased and not the chaser. I will be operating my KX3 at 10 watts. You may want to see if you can get a sweep of all ten call areas during the month of January. If you are not a SKCC member consider it. It is free. See the SKCC website. My SKCC number is 5123T.


I enjoyed this one!

Something Old Something New Ragchew


Per the Urban Dictionary, a ragchew is a long QSO between two amateur radio operators. This is generally what amateur radio operators are doing on the radio when they're not contesting, testing equipment, bouncing signals off the moon or meteor showers, providing communications in national emergencies, sending still or moving pictures or text back and forth, connecting to packet radio networks, and partaking in nets.


I enjoyed a ragchew QSO Sunday on 20 meters CW with Woody WD9F in Springfield IL. We had a combination of new and old rigs. He was using a Drake 2C receiver and 2NT transmitter combination. Woody was exercising the Drake pair since if you don't fire them up they will go bad. I started hamming with the Drake 2C in my novice days back in the late 60's and used it for many years. Indeed for this QSO, I was set up portable in my parent's yard where I grew up. There are lots of antenna spirits that dwell there including a vertical, quad and dipoles.

My rig was the new Elecraft KX3 running 5 watts on internal batteries The antenna was an end fed half wave wire inverted vee style using a SOTA tuner. I don't know if my end fed half wave was optimum but it sustained a 30 minute solid QSO with Woody. I did not use a counterpoise other than the short coax. I have set my half wave lengths using the method suggested by Steve Yates AA5TB.

Woody was interested in the antenna since he does QRP portable also. In fact he wrote an article about QRP portable for CQ magazine. He said he is trying not to buy a KX3 but I think I pushed him over the edge. Some day folks will say I remember the KX3. Well my bets are they will still be using the KX3s as the shelf life should be good with all the SMT parts.

These ragchew QSOs are really value added. Thanks for a great one Woody!