The Rapid Deployment Amateur Radio (RaDAR) program is a great way to exercise your portable operating skills and equipment. See this link for the updated Monthly RaDAR Challenge rules. In addition, there is a Google+ Community for sharing your RaDAR operations at link You don't have to join the community to participate in RaDAR. The RaDAR program is administered by Marcus KD0JKM. The RaDAR concept was originated by Eddie ZS6BNE. See Eddie' blog at this link.

Have Fun with RaDAR!

The Elecraft KX3 is capable of decoding and transmitting CW, PSK and RTTY without a computer. The KX3 modes that achieve this are PSK-D and FSK-D. Eliminating the computer is an advantage to portable operation. There are some caveats to be aware of. The success on decoding CW varies with the sender but is still useful. The display of decoded signals is on a short scrolling display. You don't have a waterfall display on PSK. But this does not mean you can have fun with these modes. The input for PSK-D and FSK-D is via the paddle inputs. For me, I have yet to fully master the paddles.

Perhaps a portable computer such as a laptop, tablet or smart phone could be used for more capability. My issue with that is I can't see the display in direct sunlight. So this is where the Ham Central Terminal (HCT) comes in. This is a new product from QRPworks. It has a sunlight readable display and works at night as well. The display can provide 80 characters at a time with scrolling memory. It will accept a PS/2 computer keyboard so paddle inputs are not required. The other value added is it will capture frequency and mode from the KX3 to allow keeping a log of up to 1200 QSOs. The capabilities are well described on the QRPWorks.com web site.

I have a HCT and the good news is with a mini keyboard it fits in my backpack with the KX3, Alexloop and external battery. The keyboard and display make PSK a bit more user friendly and I enjoy the logger. It has some limitations in fields but the essentials are there including the time of day which is available if you install a CR type cell internal to the HCT. I have been making PSK QSOs but for me perhaps the logging is my favorite feature.

The unit has ten memories for messages usable for CW, PSK and RTTY. They are easy to edit and do not require any additional software. You access them with one press of a function key. This is better than the two presses required on the KX3. You can also stack the memory messages not just the same message but combinations. I don't think the KX3 will let you stack mixed memory messages yet but it is on Wayne's list. It will also substitute a call or serial number in the messages. I am not a big time contester but I could see the memory capabilities as very handy for Field Day.

I am impressed with the job QRPWorks has done with the HCT. I prefer a firmware approach over the mix and match of software and interfaces. I have not covered every detail but I am having fun with mine. So check it out.

With several consecutive rainy days and rain in the forecast, I was doubtful that the rains would let up enough to allow an outing to Falling Waters State Park near Chipley FL. But I arrived at 8 AM and the rains held off until 2PM. I would have been hiking with the gear but with the threat of rain I setup at a pavilion.  The setup was the the usual KX3 and the Alexloop. 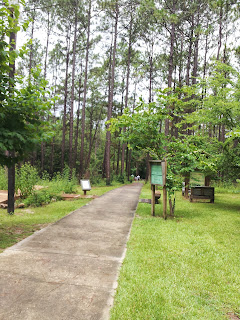 I started on 40 meters thinking I could catch the Central FL QRP Group on but I had the weekends mixed up. I did snag Jerry AB4ZB in Smithville TN. He was at the Fiddler's Jamboree. So on to 30 meters. I worked WW4DX John in Advance, NC. He was running 2 watts. Then Lee K5LY in New Hope TX. On to 20 meters CW, I worked John KG9HV in Lafayette IN. He gave me a 419 but we made a go of it. He commented on conditions not being very good. There was not much going on 20 CW.

Things got interesting on 17 SSB. I worked HH5/KC0W in Haiti with no problem. Then on to 15 meters. I had a good QSO with KE4RG in Gretna VA. He said it was his first CW QSO in 30 years. So that was a special QSO for both of us. Next I worked KX0R doing SOTA. Well what about 10 meters. There were some signals on SSB. I gave N9NUQ a call and he turned his big beam around for me. The KX3 only lets me load 5 watts into the Alexloop on 10 meters but it was enough for a nice SSB QSO.

Now what had I overlooked? Well on to 20 meters SSB. I was able to work three Colonies Special Event stations; K2K, K2J and K2F. One last shot on 20 meters CW yielded WW2SUB which is the Batfish submarine in OK. At 2PM the rains picked up, a crowd gathered under the pavillion and not having lunch yet, this made it time to go.

I'd say that this was above average outing. Once again I am pleased with the convenience and performance of the Alexloop. The pavillion had a metal roof and I was moving the loop under the pavillion when we had light sprinkles. But it still worked well.

The Rapid Deployment Amateur radio (RaDAR) program is a good way to exercise your portable operating skills and equipment.  See this link for the RaDAR Program rules. In addition, there is a Google+ Community for sharing your RaDAR operations at this link You don't have to join the community to participate in RaDAR. The RaDAR program is administered by Markus KD0JKM. The RaDAR concept was originated by Eddie ZS6BNE.
Posted by N4KGL at 10:58 AM