The Rapid Deployment Amateur Radio (RaDAR) Challenge is sponsored by Eddie ZS6BNE. The rules are published in the SARL Contest Manual. Note, that it is no longer a contest but a challenge. The challenge is unique in that it encourages moveable stations. The stations move specified distance based on the mode of transportation. I chose to move by foot which requires a distance of one kilometer.

In Northwest Florida, we have many good venues for portable and moveable stations. This year I picked the parks in Port Saint Joe, Florida along the Bay Trail. Suzy my basset puppy was my companion. I previously have been on the beaches at St Andrews State Park, but they don't allow dogs on the beach.

Certainly, moving on foot brings to mind lightweight gear and QRP power. However, I really did the opposite this time. I have a dog stroller which came about because I thought it would be an idea for Suzy. But, I found Suzy has no trouble on one kilometer hikes. Therefore, loaded my Icom 7100 with a 40 amp hour battery in the cart. In addition the cart can anchor a Chameleon whip antenna. So during the challenge, Suzy and I setup a at five locations and made four one kilometer transitions from location to location. I will give you some notes about each location.

Location 1 was at Pate Park which has some tall pines. I used the Chameleon Tactical Dipole Lite. It has two 60 foot legs. I used a pine tree to setup an inverted vee configuration. I focused on 40 meters because I get help from hams I know nearby. I worked Bob WB4BLX and Vic K4GXV on SSB and CW who were setup at the Bay County Florida EOC. I also worked Jim K4LIX from Callaway Florida, Mike KK4ELJ from Youngstown Florida and Tom WD0HBR in Dothan, Alabama all on 40 meters CW. So having more than enough, I headed to location 2 with the cart and Suzy. 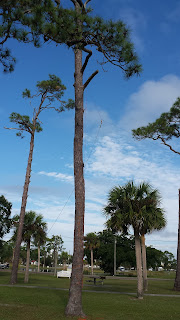 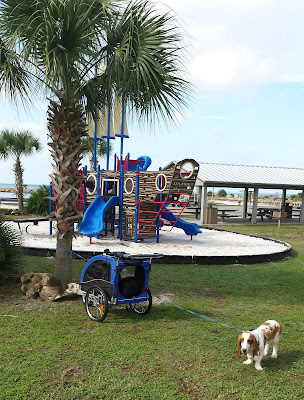 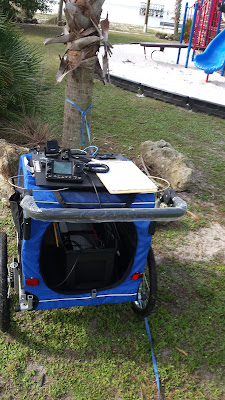 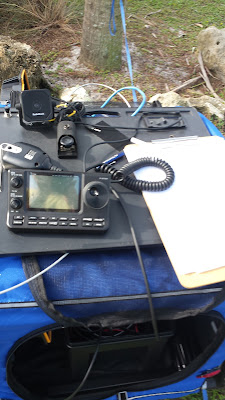 Location 2 was at Jetty Park. It has no trees so I used the Chameleon Hybrid Micro and the MIL Whip/extension. I reestablished contact with Bob WB4BLX and Vic K4GXV at the EOC on 40 meters CW SSB. Signals were very much down compared to the tactical dipole lite at location 1. I also worked Jim K4LIX. I decided to try 20 meters for fun and worked N0KOE in North Carolina CW. I got a 589 report. 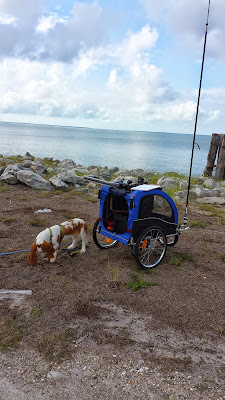 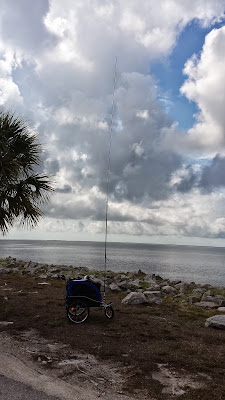 Location 3 was at a pavilion over the bay at Pate Park. It is a different antenna challenge having a roof overhead. I ended up draping the tactical dipole along the rafters and the railings. It worked fine. I worked KC1DXD and KC1EVT on 20 meter SSB. I worked WH6LE in North Carolina and KE5AL in Texas on 20 CW. They were doing the SKCC Weekend Sprint. Last was XE2JS in Chihuahua City, Mexico on 17 meters SSB. 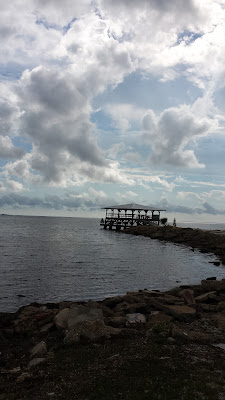 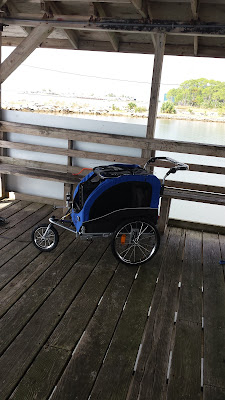 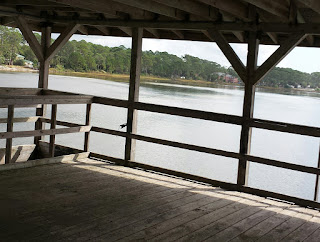 Location 4 was in the George Commerce Park area along the bay. I did some meandering in the neighborhood to get the one kilometer distance in. The Chameleon Hybrid Micro has a 60 foot wire if you are not using a whip. I used that wire as a sloper from a pine near the bay. I worked WB7T in El Paso Texas on 10 meters SSB. Then I had a string on 17 meters SSB including K5VWZ Texas, K4GW mobile in North Carolina, KC9PXJ in Illinois, KG5AYF in texas and W8YCM in West Virginia. 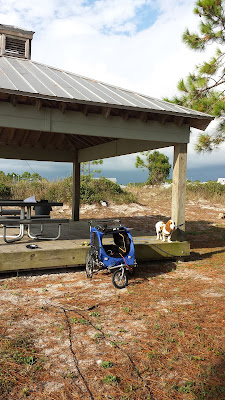 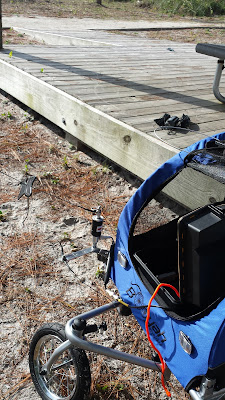 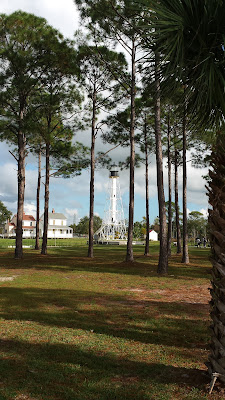 Location 5 was back at Pate Park. I setup at a jetty leading out to the pavilion. At this location I had saltwater on both sides. This was a perfect place to use the Chameleon Hybrid Micro and the MIL whip. As vertical polarization can really pay off near the saltwater. It did pay off as I had a string of ten 17 meter SSB contacts to end the day. I won't list them all but they included Gordon KB2SSZ in New York who had gone out doing RaDAR earlier but was back at the shack, Happily, I worked N0OY who was doing pedestrian mobile from Kansas. 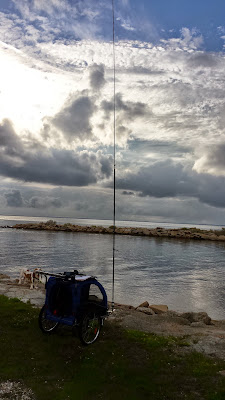 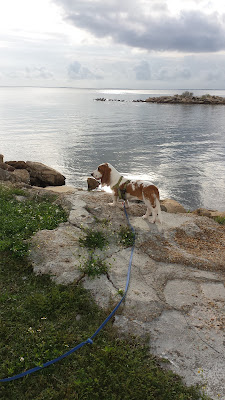 I enjoyed doing RaDAR at the Port St. Joe parks and especially Suzy's company. RaDAR is fitting your gear to the venue and your movement plan. The cart and the Chameleon Antennas fit the bill. Of course the next RaDAR Challenge in April will be an opportunity for a different venue and/or different gear. My RaDAR friends including Fred VA3FAL and Tom G0SBW did not have cooperative weather. We will see who may report in at the RaDAR Community on Google+.

RaDAR can be practiced at any time. It does take some effort to pack up from one location and move to the next but the change of scene and the different antenna challenges are rewarding. Thanks to Eddie ZS6BNE for coming up with the RaDAR concept. Eddie is evolving it over time. Eddie's blog is https://zs6bne.wordpress.com/