St George Island Florida has both a State Park and a Lighthouse on different parts of the Island. St George is FL007S in the US Islands directory. Saturday was the W/VE Island QSO Party. Linda my wife and Suzy our Basset made this a get-away weekend spending Friday and Saturday night at the St George Inn which is a block from the Lighthouse.  First of all, the island is very popular with dog owners as dogs are welcome on the beach. So Suzy was right at home, she enjoyed the bed at the hotel, the beach and met many other dogs over the weekend, There is access to the beach right behind the Lighthouse.


This expedition became a Panama City ARC Club event as well. I operated with the club call W4RYZ. Bob KK4DIV and his wife Carla arrived Saturday morning from Panama City. Bob used a portable generator to power his FT-450 rig. I had contacted the Lighthouse Association and had permission to use the light as support for an antenna. However, the Lighthouse did not open for climbing because of lightning in the area. I setup at one of the pavilions near the beach instead. I used the Icom 7100 on battery power and a Chameleon Hybrid Micro with a whip. I got in an hours operating and picked up five islands.

I went to pickup Linda and Suzy and had lunch. On our return, Vic K4GXV his wife Sally KD4UUN, Bob WB4BLX and his wife Linda KG4TJL arrived from Panama City. I decided it was time to setup an antenna on the Lighthouse. I was not as easy as it sounds. I took 150 feet of line to the top of the light. The line became a huge tangled ball. So I had to unravel it which must have taken 30 minutes. After that I got Vic and Bob's assistance to deploy a Chameleon Tactical Dipole Lite. It was inverted vee style with the top about 55 feet up. A ham is always wanting to try something like this right! I setup at the base of the light and worked four more islands. I also worked KK4DIV on four additional bands. I had 23 contacts for the day and nine islands. I figure I got a good percentage of the islands that were active.

On Sunday Linda, Suzy and I returned to the beach behind the light. Suzy enjoys the sand but does not want to get in the water. Although, she got close and the waves chased her back. I setup with the KX3 and the Chameleon Vertical. I got seven contacts on 20 meters. One was Fred VE3FAL. Fred was using the You Kits TJ2B hand held rig.

Thanks to the St. George Island Lighthouse Association for having us hams. And thanks to Jim the Lighthouse Keeper for his assistance.

The US islands W/VE QSO Party on Saturday 29 August has turned into to a get away trip to St. George Island, Florida for Linda and me. Suzy is going too. I enquired and got permission to use the St. George Lighthouse for an antenna support. I am having a self debate on antennas to use. I am thinking currently to use a 20 meter dipole as the main antenna and then a sloping 60 foot wire to the ground for the other bands.The sloping antenna is the Chameleon Hybrid Micro. I will use a single line over the lighthouse railing. I guess I will go with my Field Day portable station based on the Icom 7100 and a 40 amp hour battery. The WX is touch and go with thunderstorms predicted. 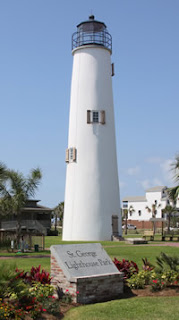 More on the QSO Party information is at http://www.usislands.org/ Information on the Lighthouse is at http://www.stgeorgelight.org/ and the State Park at https://www.floridastateparks.org/park/St-George-Island I am looking forward to many contacts including RaDAR operators.

I was pleased to attend the Huntsville Hamfest this year. My wife Linda joined me. We met up with John W8JER and his wife Micky KE8ASK from Sturgis Michigan. I also met my buddy John K4KQZ from Columbia Tennessee.  Saturday in addition to shopping, I attended the QRP presentation on portable antennas by Craig NM4T.

The highlight of the trip was the QRP BBQ that Craig puts on Saturday Night at the cabins on Monte Sano. There were three RaDAR Ops there.  First was Don KK4QAM and his wife Carol. I found out Carol is KK4VBT, a General Class, and likes JT-65. Second was Steven N0TES AKA Wise Seeker on Google+. He owns Alpha Antennas. The third is Craig NM4T known as the "Huntsville Guy." There were LNR radios to try out including the Mountain Topper and the LD-5. Of course there were LNR antennas in the trees.

Craig gave us some tips on island operating like "Buddies in the Caribbean" along with videos. We also heard about SOTA. I gave a short talk on the K-Tor pedal power generator and the supercapacitor bank. Jerry N4EO volunteered to do some pedaling. Thanks Jerry!

In the shopping department, I got an LNR 40/30/20 End Fed to go along with my LNR Mountain Topper. My best deal was a copy of the Stealth Amateur Radio book by Kirk Kleinschmidt for $4. It lists for about $150 used or $200 new on Amazon.

Sorry I just did not get many photos. The one above is by Steven. 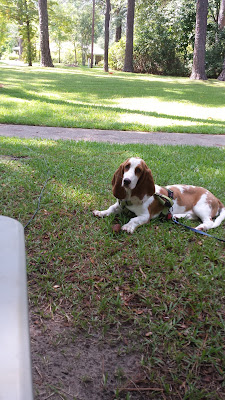 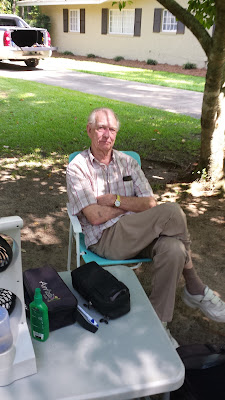 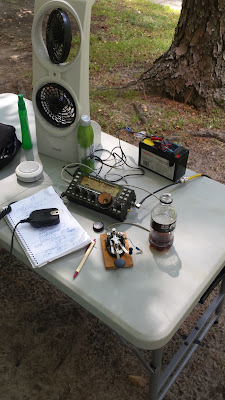