Flight of the Bumblebees is one of several QRP events that draw a big following. I decided to go to St Andrews State Park which is one of my favorite spots for portable ops. I chose the North Side of the park by Grand Lagoon. I have even a specific picnic table I like right on the water. This was a big outing for Suzy our seven month old basset. I was a little concerned with the heat.

First off my favorite picnic table was occupied. So I picked another further away from the water. The shade was good as it is under a good stand of trees. So I used the pine trees tho do an inverted L with the 60 foot wire that comes with the Chameleon Hybrid Micro. I got the vertical point about 25 feet high and the rest was sloping some what. I was 20 minutes behind the start. It turned out some adults threw a water bottle not at Suzy but in her direction. That got her a little skittish. So I heard a buddy Bobby AK4JA but Suzy decides she will feel safe on top of the picnic table right in front of me. I sent the worse code. It really took Suzy a while to get comfortable with the scene. I had a nice string of twenty on 20 meters. The 11th contact was KS4L randy who I met at the Huntsville Hamfest.


The 21st contact was on 40 meters it was Jim K4AHO who I have met at the Orlando hamfest. He is in the QRP group there with Kelly K4UPG. My 25th contact was Larry W2LJ. It just would not have been a QRP event without Larry. Larry blog is http://w2lj.blogspot.com/ Two contacts later was Craig NM4T booming in from Huntsville. Craig is know as the Huntsville QRP Guy. He sets up the Monte Sano event on the Saturday night of the Huntsville Hamfest. My 32nd contact was Sandy W5TVW who I met on the air on Saturday during the RaDAR Meetup.

All together I had 39 contacts. 30 on 20 meters and 9 on 40 meters. I did not have much trouble being heard. So I think the Chameleon inverted L was a good choice as well as the Elecraft KX3. Suzy eventually discovered that under the table was just fine. She had a good time overall. So I was pleased and enjoyed the many familiar calls. It is pretty amazing what QRP to QRP can do. Now how about that Skeeter Hunt August 9th! 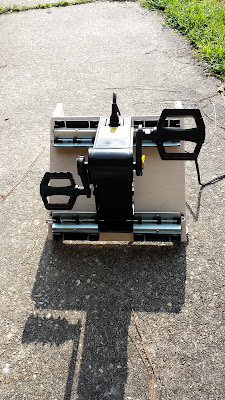 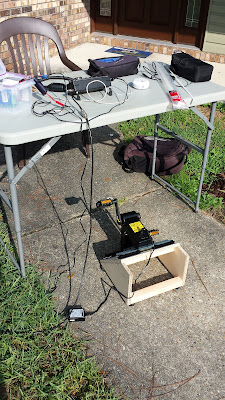 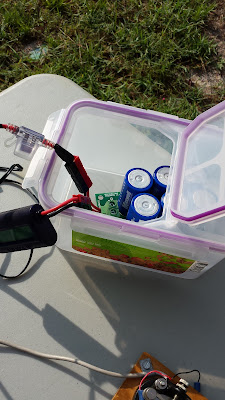 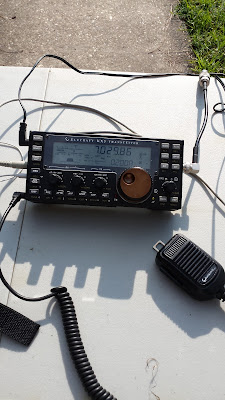 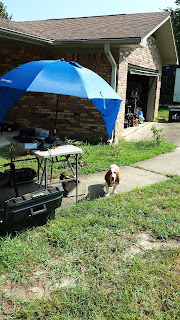 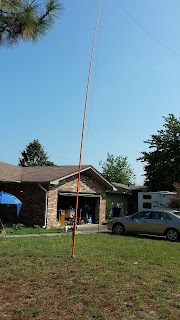 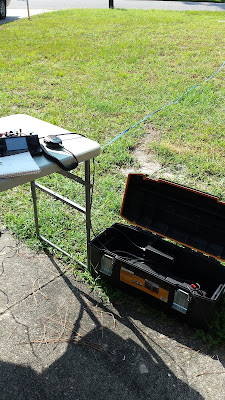 Scorch Your Butt Off RaDAR Outing

July 12th was an appropriate date for the Scorch Your Butt Off QRP Event. In Panama City Florida the temperature was 93 Degrees F. The "RealFeel" was in the one hundreds. Never the less, I was going to participate. I thought I would head for the shade. Our Under the Oaks Park would be appropriate I thought. I was bringing Suzy our basset along. To my dismay the park has a no dogs allowed sign. I think that is the first park I have run into with no dogs allowed. So time to vector to another location for the 11 a.m. start. I decided to go to George Park which is where the Panama City ARC clubhouse is located. The picnic table was occupied so I went to the far corner of the park where a couple of large oak trees are located.

I clamped the Chameleon Hybrid Micro to the metal fence and extended the 60 foot radiator up over a limb and out to another tree.  The rig was the Elecraft KX3. I could hear very little on 14.060 at least no participating stations. A similar situation on the Homebrew Sprint the week previous. Well from what I read on Larry's blog  I was not alone. However, there was a fair number of SKCC stations doing the Weekend Sprint. I suspect most of them were not QRP.


My first QSO was on 40 meters. It was K4PDM in Kentucky. He was not in any sprint, After that I picked up four SKCC stations on 20 meters CW. It comes in handy to be in the SKCC. They like to work me for credit. In RaDAR you want to leverage on any event you can. I probably should not have had Suzy out there but she dug a nice hole find the cool ground. The shade of the Oak did help.

Having five contacts, It was time to make a RaDAR move. I thought Suzy had enough so I went home and setup in my front. I used the Chameleon Hybrid Micro with a tripod and the whip. With some effort I worked another four SKCC stations on 20 meters. I forgot to take any pictures on the second setup.

Well, I did get nine RaDAR Points on the day with one move after the first five. It is always interesting to select the antennas for each location. I did find the large oak at the park was a great support and provided helpful shade. I'll remember that for future outings.

The aim is to encourage and recognize Rapid Deployment Amateur Radio (RaDAR) activity. RaDAR Operators can keep a count of RaDAR QSOs for RaDAR Points. A RaDAR Point is earned by making a contact while on portable outing away from their permanent station. To get more than five RaDAR Points on an outing you must travel the required distances (See below) before making additional contacts. RaDAR Active Points will accumulate on a monthly basis and then reset.

Posting a photo to the RaDAR Google+ Community (or anywhere you choose) and additional details for RaDAR activity is welcome but not required. A post to the community monthly will solicit the current RaDAR Active Point counts for participants. Participants may list their RaDAR Active Point count on any post to the community. For fun use the hashtag

All amateur bands are allowed including cross band contacts via amateur radio satellites.
Modes – CW, SSB, AM, FM or any legal digital mode. QSOs via terrestrial repeaters will NOT be allowed. This is not a contest there are no winners or losers. Participants do it for the challenge and enjoyment of Rapid Deployment Amateur Radio.
Travel Modes and Required Distances:
Modes of transport and required movement distances (moving RaDAR stations only)
Vehicles, motorcycles and motorboats etc. (Motorised transport) – 6 km
Bicycles – 2 km
On foot and paddle canoes – 1 km
Wheelchairs – 500 m
Aeronautical mobile stations are considered moving stations and can communicate at any convenient time.
Note: Moving RaDAR stations can move at any time but are required to move to the next destination after five contacts have been made from the present location. The move needs to cover the required distance. This requirement tests the ability to rapidly re-deploy your amateur radio field station.