I took advantage of a trip to Miramar Beach near Destin FL to visit the TopSail Hill Preserve State Park. When I arrived I did not know what it offered. The park is on the beach but has trails through the woods and has a couple of lakes. I took advantage of a trail and hiked 2.5 km with my gear to some picnic facilities with restrooms no less. Hey that is all I ask for portable ops. My backpack had everything I needed for this situation including KX3, battery Alexloop and accessories.

My first contact was Wink WA8KOQ in TN on 30 meters. Then I switched to 17 meters SSB which was open. My first QSO was N9IMS the Indy 500 special event station. This was followed by working KA1GJU Aeronautical Mobile. Kris was in a 737 headed west over New Orleans.  A fun QSO he actually said he would rather be in the park than the plane. This was the Made My Day QSO. Then I worked W7P a special station for Lake Powell/Grand Canyon. The final QSO was EA8/DK5AL at La Palma Island the most north-westerly of the Canary Islands, Africa. He was running 80 watts to a dipole.

This was an enjoyable outing and I got a 5 km walk in. This qualifies for the Pedestrian Mobile category multiplier in the RaDAR Program. The RADAR program is a good way to exercise your portable operating skills and equipment. See this link for the rules. In addition there is a Google+ Community: Rapidly Deployable Amateur Radio (RaDAR) for sharing your RaDAR operations at this link You don't have to join the community to participate in RaDAR. The RaDAR program is administered by Markus KD0JKM. The RaDAR rule structure is close to that formulated by the founder of the RaDAR contest idea: Eddie ZS6BNE. 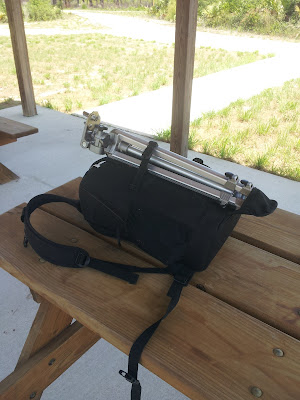 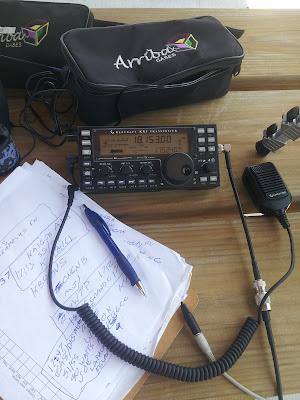 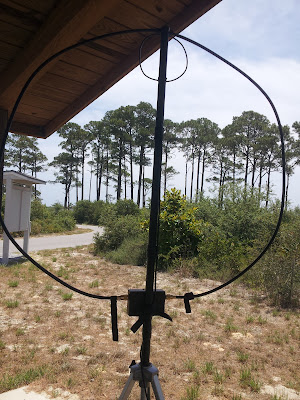 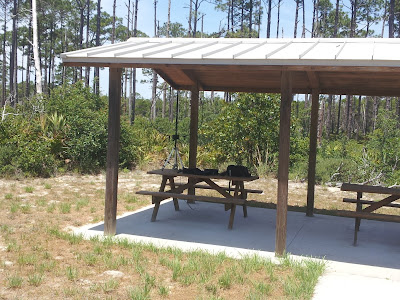 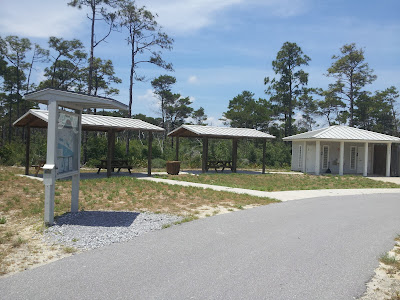 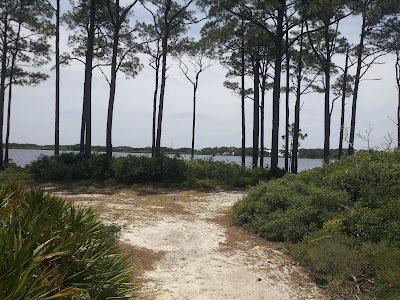 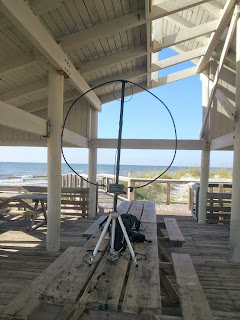 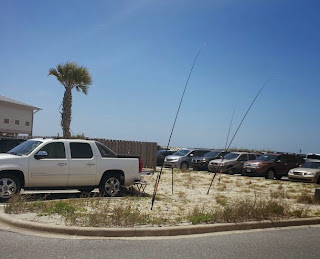 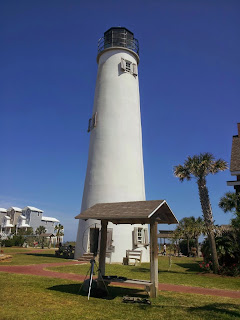 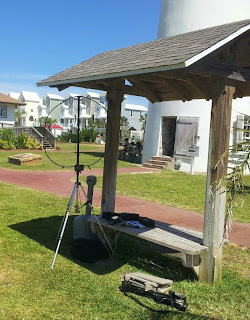 From my teen days as a ham, Field Day has had special meaning to me. In those days, my fellow teenage hams and I would set up the antennas and the rigs at the site, someone from the ham club would drop off the generator and we had it to ourselves the course of 24 hours. I have always thought, plotted, and planned for field day pretty much every non-field day day. Well I did take 25 years off from radio but for the last five or six I have been practicing field day often doing QRP portable. So in any case, I am looking toward June 22 with great anticipation.

This year I acquired an Elecraft KX3. This rig will get its chance to shine at field day. One great feature is the Digital Voice Recorder (DVR) as well as CW memories. Another plus is low power consumption. I have enough batteries to make the duration. Two of them are LiFePO4, 10AH and 15 AH, which should be good for about 20 hours. I would love to have the soon to be released QRPWorks Ham Central Terminal to support CW, PSK-D, RTTY and logging. Yes my laptop could do it but it needs more power than the HCT and the laptop screen is difficult to read in daylight.

I have two antennas planned  One is a NA4RR hex beam covering 20, 15, 10 and 6 meters. It will be about 18 feet up. A second is a 40 meter full wave horizontal loop up about 30 feet. It should cover 40 through 10 fed with window line. It also should work as a vertical on 80 meters with the window line shorted together and some counterpoise wires. The full wave loop on 40 meters it is NVIS but I'll take that for Field Day.

So I would say my equipment is better than my op skills but I can plod along. I am likely to get some help from fellow club ops. I am hoping one year to do a QRP battery entry.The club is a 2F EOC entry this year. We are W4RYZ in North FL. I hope everyone can support their local Field Day operation.

Don KK4DWC hosted a club fox hunt at his Mr. Grumpy's Crooked Fence Ranch near Southport FL. In addition the NA4RR Hex Beam I bought at the Orlando Hamcation was deployed.

This is actually a pre-test for the upcoming Field Day. Marv KK4DKT and other club members did most of the work. The Rohn 9H50 telescoping mast was supported at the base by the rocket club trailer. It was only extended to about 18 feet.. There were 9 guy wires to angle pieces driven in the ground. Marv headed up the assembly and pushing the mast up. We just used the wires for 20 and 15 meters. The SWR was excellent across those bands. No tweaking or tuner required. It just happened that the bands were terrible I only made one QSO to VA. Bob WB8PAF also made a QSO.. So looking forward to Field Day for a real test. After Field Day the Hex Beam will transition to the Panama City ARC club. Hint they have a nice tower.

A Tale of Two Hobbies: The Rest of the Story

One of my stories, A Tale of Two Hobbies, ended up on page 25 of the Spring 2013 QRP Quarterly. Also see this post. Here is the rest of the story in John's words:

Greg
I was so impressed with your QRP station from the cotton field,
that I built a mag loop and bought a new Yaesu FT 817nd.
I made my first contact today.
E77DX was 59 at my station and he gave me a 57.
First QRP QSO and I get Bosnia!
Hope the pics come thru ok!
73
John/W8JER

He did a great job on the loop. Here are the pics: 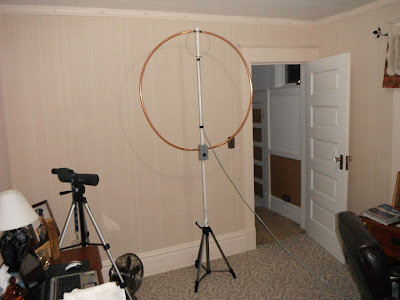 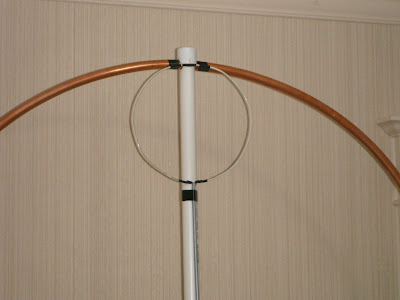 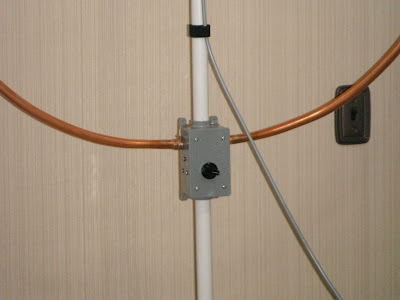 The Byonics TinyTrack 4/GPS-2 will combine with an FT-2500 transceiver  magnetic mount antenna and SLA battery to deploy APRS in someones vehicle very quickly. The Byonics PicCon uses the same interface cable and will support our club fox hunts. I threw in a mic, backup 12V cigarette power cable and a power meter for grins. 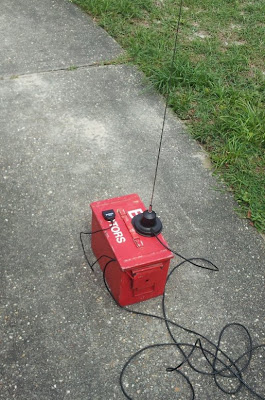 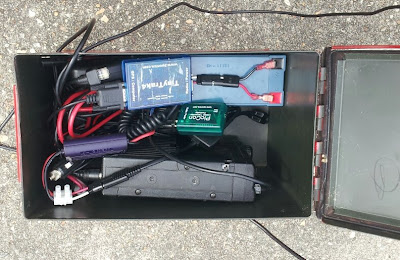