W/VE Islands QSO Party and Parks On The Air at Okaloosa Island, Florida

Dennis WA6QKN and I had lots of ham radio fun on Saturday at the Gulf Islands National Seashore Okaloosa Island Day Use Area near Destin, Florida. The US Islands organization sponsored the W/VE QSO Party that day. Okaloosa Island is US Islands FL003S. Also, this site is part of the National Park System and counts for Parks On The Air as KFF-0661. I was concerned initially when I saw a lot of vehicles at my favorite picnic area. It turns out that Marine recruits were having a drill and picnic before they leave for boot camp. No worries as we had plenty of space for our setup.

I choose my vertical oriented 100-foot loop for the antenna. It is the one I built for Field Day. It went up smoothly with the three fiberglass poles. We used a sledgehammer to drive the angle iron stakes for the poles. That hammer would be heavy for RaDAR. The rig was my Icom 7100 running 100 watts using a 40 AH Bioenno LiFePO4 battery. An AH-4 tuner matches the loop impedance to 50 ohms for the rig. I am pleased with the ease of erecting the loop and antenna. It did a great job on 40 and 20 meters and even the high bands 17, 15 and 10 meters.

As the day went on the bands started sounding decent. We operated only SSB. We worked a number of Kansas and Ohio QSO party stations. They dominated the bands. The other W/VE Island stations were hard to find. I did get called by Scott ND9E operating from an island in Missouri..Later, I answered a CQ from VA3TIC on an island in Ontario. Dennis saved me the chore of logging all day. That was a great help.

In regard to Parks On The Air, I worked KFF-1077 in Arkansas. That counts for POTA Park to Park. I spotted myself for POTA and a couple of Croatian stations came right back. For grins, we checked the high bands. To my surprise, there was an opening to Brazil on 10 meters! I also worked Suriname on 17 meters. The highlight of the day was snagging KH6TU in Maui Hawaii operating the Hawaii QSO party on 15 meters.

Dennis and I worked in a  repeat of the Saltwater Effect experiment with two WSPRlite Beacons and N6BT Bravo 7K verticals. Dennis did a lot of the setup and tear down of the verticals. We left one Bravo 7K vertical unattended on the beach at the bay. It was right over the salt water. Fortunately, it did not attract any undue attention. The second vertical was across the park road on a grassy spot.


Despite the sticky weather, Dennis and I had a great day and Suzy did as well. It was well worth the trip from Panama City. I introduced Dennis to the QSO Today Podcasts on the trip home. We listened to Eric Guth 4Z1UG interview Art Bell W6OOB.

Monday, August 21st was the Solar Eclipse across the USA. I setup for the Solar Eclipse QSO Party at Kinsaul Park in Lynn Haven, Florida. I had a short turnaround time since I had just got back from the Huntsville Hamfest Sunday Night. I was pleased to get all the gear packed up and then setup at the field. It included the 100-foot vertical loop I built for Field Day, the Icom 7100 transceiver and my laptop computer. I also deployed two Bravo 7K verticals each with a WSPRlite beacon.

The goal of the Solar Eclipse QSO Party was to maximize activity on the HF bands This would provide lots of data for the Reverse Beacon Network, PSKReporter, and Weak Signal Propagation Reporter databases for the scientist to study. My WSPR Beacons contributed. I also called CQ on CW many times which was captured by the Reverse Beacon Network.  I did get answers to my CQs including fifteen contacts of 20 meters and three on 20 meters. I will turn the log I made using the N1MM+ logging software.

I could not discern any dramatic effects of the eclipse on my reception. However, at the maximum, I had a Canadian contact on 40 meters. It is unusual for me to work that distance on 40 meters in the daytime. As the sky got darker, many small birds and dragonflies joined us. The birds used the radials on the Bravo 7K verticals to roost.


I enjoyed getting a visit from Bob KK4DIV in the morning. My wife Linda also came by and we enjoyed looking at the eclipse together. The maximum was about 85% at 1:38 PM. The were lots of clouds during the day but there were enough breaks to see the solar eclipse.


I had a second reason for the two vertical with WSPR beacons. I wanted to see if the spots would be similar. My previous salt water effect tests assume the two setups are equivalent. The simultaneous spots compared very well. However, one beacon had almost double the spots of the other. It could be the beacon or the antenna. It also could be that there was another station on the same frequency for one beacon. Oh well, this will mean more tests to sort this out.


I think the process of setting up the gear outside for various events is good practice for what ever situation may come up. This setup was pretty much my Field day setup. You always want to get to the field with all the gear you need right down to those coax barrel adapters. This time I was successful.

I am plan to participate in the Solar Eclipse QSO Party (SEQP). Ham activity captured by RBN, PSKreporter, and WSPR will be used by scientists to understand the effect of the eclipse on HF propagation via the ionosphere. They want to maximize activity on the ham bands to get lots of data. CW and digital modes are best. SEQP logs will also be collected. There are bonuses for being outside and public place. 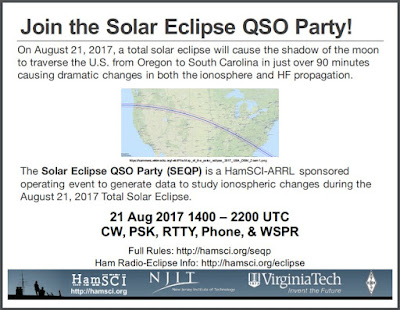 The Solar Eclipse QSO Party is 9 to 5 CDT. The eclipse will be maximum in Panama City at 1:38 PM I plan to operate from St Andrews State Park.The grid square there is EM70DD. I can take advantage of the salt water effect on the South shore of Grand Lagoon. I will use my Icom 7100 to a Chameleon vertical antenna mainly on 20 meters CW. When I CQ, it should be picked up on RBN. The SEQP exchange includes grid squares. I will log with N1MM+ and submit my log for analysis.


The SEQP also encourages WSPR.I plan to deploy two WSPRlite beacons each to a Bravo 7k Vertical along the shore line. I am double checking the beacons to support my salt water effect study. The spots for the beacons should be similar.

These are my plans as of now. It will be interesting to experience the eclipse effects on propagation in real time. Consider operating if you can. It is in the interest of science you know.

The 2017 Second Saturday Sprints are sponsored by QRP Field Ops Google Plus Community. They occur May through October each year. The sprints are two hours 1900 UTC to 2100 UTC. See the rules at this link. The goal is to work other members of the QRP Field Ops group. However, any contacts you make will count. Therefore, you can leverage off of other events like the SKCC Weekend Sprint.. Likewise, I have a cadre of local chasers. They find me on HF and 2 meters simplex. This is good practice for RaDAR ops where you need five contacts anyway you can get them before moving to the next stop.


This month, I chose to operate QRP portable from St. Andrews State Park. I was involved with salt effect tests during the first part of the day. Dennis WA6QKN assisted. I continued using the Bravo 7K vertical for the sprint. The rig was the Elecraft KX2 running 5 watts. I am enjoying the Alex-Mic I ordered from HRO. It provides an amplified speaker and a microphone.


I cycle through 40 CW, 40 phone, 20 CW and 20 phone, My out of town contacts included PA and Orlando on 40 CW, PA and ON on 20 CW, and PA, OK and FL and 20 Phone. The rest of the contacts were local chasers including Bob WB4BLX, Don KK4DWC, and Steve N4VSP. I had fifteen contacts for the two hours. The Bravo 7K vertical did well. I was right on the shore of Grand Lagoon taking advantage of the salt water effect. 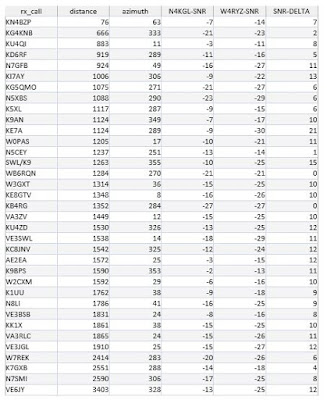