You Made My Day AK4LP

I was testing a 20 meter dipole with an Electronics USA MK-67 BNC center insulator and 25 feet of RG 174. The dipole was supported by crappie poles in the front yard. The rig is the KX3 at 5 watts. So does the new antenna work? Well good enough, as I had a short but sweet QSL with Bob AK4LP in Forest VA. The cool thing was he was on a Youkits HB-1B and an Alexloop. The only thing that could be better would be Alexloop on both ends. I have both a HB-1B and and Alexloop as well. That was a good QRP to QRP QSO! Then I was lucky to work SM7ZDI Vic in Sweden. He had the patience to pull me out.

I have setup a shade for the KX3 as you can see below. I can handle sunburn but I am uncomfortable about the sun heating the black case of the KX3. The 20 meter dipole is a light weight option to pack and I guess the loss is not too bad with RG174. I checked with an online calculator and the loss is about .8 watt at 14 MHz and 1.5 SWR. 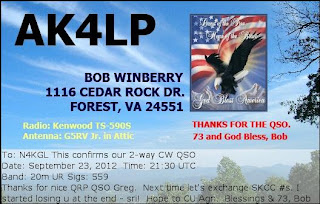 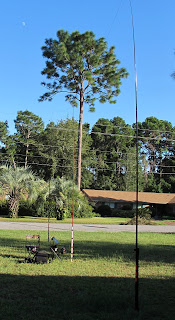 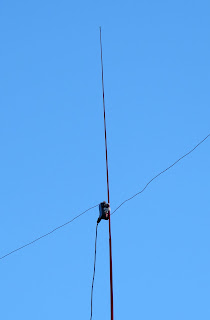 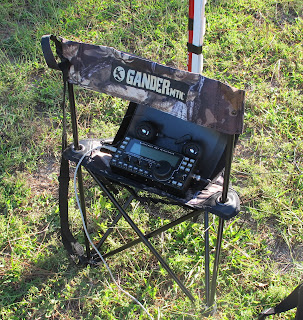 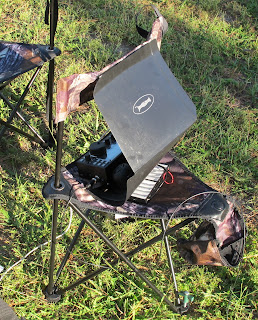 Here are some Reverse Beacon Spots for 20 meter dipole at about 18 feet high at 5 watts and 25 ft of RG174 feedline.

KX3 Portable with 9 to 1 Balun

I had previously discovered that the Balun Designs 9 to 1 balun seemed to tune just about any end fed wire using the Icom 703 and its internal tuner. So today I tried it with the KX-3 from the front yard. I used a 24 foot wire sloping up to the tip of a 20 foot crappie pole and a 16 foot counterpoise wire laid on the ground.. Using the KX3 internal tuner, I got SWR under 2 to 1 on 80 thru 6 meters except 60 meters was 2.1 to1. I exchanged the 16 foot counterpoise with a wire on camping clothes line reel and played out maybe 40 feet as the counterpoise. Then 60 meters tuned below 2 to 1. Of course, low SWR does not necessarily mean it radiates. However, I am encouraged with the QSO I had with KG9HV on 20 meters and the Reverse Beacon results for 5 watts below.

You will notice in the photos I am using two Gander Mountain camping chairs. The chair on the right is being used as a table for the KX3. I love the chairs and they were $9.99 with free shipping. I have decided to put a tent stake in the hole at the bottom of  the front leg and wedge two more stakes on the remaining legs. This is to avoid dumping the KX3 from wind or something catching the wires.

The SKCC WES is a 24-hour sprint that occurs on the second Sunday of each month, starting at 0000 UTC. I was staying in the house this weekend as my wife is recovering from knee surgery. Of course this was a good opportunity to participate in the sprint. I would rate the conditions as pretty good and 15 meters was open. The highlight for me was working Bert F6HKA on 40, 20 and 15 during the sprint. I don't know if Bert got any sleep as he seemed to be on for the whole sprint. I was happy to recognize so many regulars from previous sprints and some new calls also. I did hunt and pounce at 5 watts for all but the 15 meter contact with F6HKA which was using 10 watts. My QSO total was 42 with 22 on 20m, 13 on 40m and 7 on 15m. Note, I worked F5JWH Phil on both 20 &15 meters and NP3CW Julio in Puerto Rico on 15. I had a nice nearby QSO on 40 meters with Jack AD4TK in Shalimar, FL. He was running a Johnson Viking 2 at 100 watts.

For me this confirms my new radio setup in the front bedroom is working. I am using the KX3 with a 100 foot run of coax up through the attic and down into a closet in the back of the house. Just outside the house is a SGC 237 remote coupler which has a run of 300 ohm feedline to my doublet having the peak about 35 feet. There is some debate about using 300 ohm line on the output of the remote coupler. For me I am satisfied that he doublet with 300 ohm feedline is a viable configuration. I also tried a 30 foot vertical wire from the hot side of the coupler and a elevated counterpoise about 60 feet long. This alternate configuration tunes well but I believe the doublet outperforms the vertical wire. 15 meters might be a toss up. Of course, the doublet is much higher. Note I did some Reverse Beacon testing to confim this. A loop directly connected to the remote coupler is an option, but it is hard to go for the loop option when the doublet is already in place.

I continue to enjoy the KX3 as a base rig. I am looking forward to some Fall weather to do some portable ops. I want to test out the KX3 internal tuner with portable antennas.

Getting to know the Elecraft KX3

I have been using my factory built KX3 S/N 963 mostly as my base rig since delivery on July 31. The opportunities for portable ops have been scarce in NW Florida. The weather for the last six weeks has been rain almost every day. Issac did miss us in here in Panama City, FL but there is a low pressure left over from the storm that is giving us rain even today.

The KX3 is the most capable radio I have owned. It is my "go to radio" for base as well as portable ops. I am not experienced with the more expensive radios like the K3. So my comparision would be to the Icom 707 and Icom 703 that I also own.

I have logged about 70 QSOs. My goal was check out the rig on several bands and modes. About 20 of those QSOs were for a SKCC Weekend Sprint. This type of sprint is about as intense as my operating gets. I enjoy the filters of the KX3. I had no problem separating out the sprint participants. There is also an the absence of clicks and thumps from the strong off frequency stations.  I like that. I also find the CW auto tuning a great feature.

I check into the Sunrise net on weekends on 7.123 and get good reports from NCS Bob KF4JRO in Sarasota. I have also checked sucessfully to South CARS on 7.251. Some SSB DX I worked includes the 2012L special event station in London on 15 meters and CT3MD Maderia Island in the Alantic at 4000 miles on 17 meters.

My base station setup uses a SGC 237 remote tuner with 100 feet of coax between the rig and the tuner. I am very pleased that KX3 maintains the power to get through the SGC 237 tuning cycle. My Icom 703 will does work as it folds back on the power and does not complete the tuning cycle. I recently took the KX3 to my parent's home in Dothan, AL. I have an off center fed dipole there. The internal tuner did an excellent job of matching on all bands.

Another plus about the KX3 is the main tuning knob has a good feel and has a dimple. Simple things mean a lot. The display is awesome also. I like the simultaneous display of SWR and power. For SSB I can also choose a compression/ALC display. I can monitor my mic audio in headphones while adjusting compression and the ALC. Now that is nice and easy.

Some users report a buzz in the internal speaker. This has not been the case for me. With the AF at 20 of 40 there is plenty of volume. I can go up to 30 with no buzz. If you want room filling sound, there are lots of options. I have a set of Sony SRS M50 speakers for base use. They have an AC adapter. Otherwise for portable ops I have had success with the Chill Pill speakers.

For digital modes I have used the Signalink USB interface. They sell a KX3 cable set. I found in order to listen to the warbles I need to plug in a speaker to the Aux output on the back of the Signalink. I use HRD/DM780 software and so far i made one token PSK-31 QSO with a Cuban station.

The I/Q outputs are not a priority with me. I am able to hookup the I/Q output directly to my HP  laptop. The laptop is a new one and it does have stereo inputs. I got some promising results with NaP3 software. However, I'll need to spend more time on this feature later to get it fully worked out. I hope to see a nice setup guide to save me some trouble. SDR software setup is one of my least favorite things.

The KX3 paddle option is a great learning opportunity for me as I have been straight key only since my novice days in 1968. At zero power the KX3 makes a fine code practice oscillator and decodes what I send. I getting the iambic concept and use mode A. I'll continue to practice. My paddles became intermittent on the right side. I contacted Elecraft support and they are providing some upgrade parts for the paddles. In the mean time, I dissassembled and reassembled the paddles and they are working OK.

For DC power, I went with Wayne's recommendation for a linear supply. My choice was the inexpensive Samlex RPS1204. It works fine. I do notice a audible hum from the power supply case that increases with the load. Also, it is rather warm on the bottom with no load. I also found out that my small Radio Shack 22-507 3A supply is on the good list even though it is a switcher. It will be my travel AC supply.

The KX3 has updateable firmware. The Elecraft KX3 utility makes the upgrade easy via the supplied USB cable. I have done one firmware upgrade and it went smooth. I have not tried any beta firmware so far. There are several features to be completed via firmware and some feature tweaks are promissed based on user inputs.

My portable setup is the KX3 and a Tenergy 10 AH LiFePO4 battery. I can also go with ten AA Eneloops. I am holding off on installing internal batteries until the internal charger module is available. At that point, I will open the case and install the charger and eight XX Eneloop AA Cells. I use an external straight key. The portable antenna of choice has been the Alexloop. It is hard to beat for convience. I was very pleased to work F6HKA Bert in France on 17 meters using the KX3 at ten watts from a local park. It helps to have an awesome op like Bert on the other end.

I think of the KX3 as a QRP rig designed for maximum features at minimum power. It makes a great base rig as well. Elecraft has some guidelines for use such as 3 watts on internal batteries or 5 watts or less on digital modes. If you follow those guidelines you will do fine. These are not hard if you are used to QRP. So for my operating profile the KX3 is the best rig available and I plan to have lots of fun with it. Thanks again Elecraft!