I used a dog cart to ferry my gear for this challenge. This was a choice among many ways to carry my gear. The dog cart does minimize the packing and unpacking and the weight of the gear was not an issue. I packed the Icom 7100, LDG IT-100 tuner, and a 40 AH Bioenno Battery. So you could say it was Field Day on wheels. I used the SOTABeams 40-30-20 link dipole on two stops and a Chameleon vertical whip on the other stop.

Eddie ZS6BNE has done an excellent job of creating online real-time logging for RaDAR. This gives everyone a clue of who is doing RaDAR and where they are on the bands. Chasing RaDAR ops is indeed a challenge as is operating in the field. I absolutely love the Panasonic CF-19 Toughbook because I can read it easily in full sunlight, unlike my phone.

Through the planning process, I discovered Forever Wild Trails in Dothan, Alabama. It has bike/hiking trails. However, I took advantage of the open area at the Beaver Flats area. That was best for the cart idea. I think it is a nice area nearby for portable ops in general.

There are not as many chasers for RaDAR as for SOTA and POTA. Therefore it helps to recruit friends to look out for you. I was helped out by Tom WD0HBR, Al N4IDH, Doug WB4JPG, and Bobby K4AGR. Ken KB4XT in Enterprise, AL also looked for me. Likewise, it was nice to have contacts with Florida friends Jack N1HQ and Bob KK4DIV. They were operating RaDAR from the field. I also enjoyed RaDAR to RaDAR with Mickey N2MC who was doing POTA/RaDAR from New York State.

The weather was nice for being outdoors, cool and sunny. Suzy soaked up the sun on the stops. However, she is always ready to make a transition. She ran into some admirers along the way. 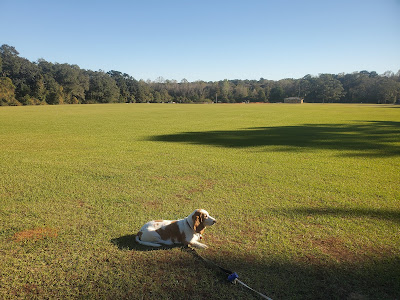 Eddie ZS6BNE has enhanced the rules with new categories for doing RaDAR like a two-hour sprint. I stuck with the four-hour challenge I have been doing for years. I see an uptick in interest this time. You may want to check out the RaDAR Group for more reports.

I plan to start on Saturday, Nov 6th at 1600 UTC, 11:00 CDT and continue for four hours. I will be using the New RaDAR rules available at https://zs6bne.wordpress.com/2021/10/11/the-new-radar/
My venue will be Beaver Flat Trail part of Forever Wild Trails on the West side of Dothan, AL I will be making five contacts followed by a one-kilometer walk and repeat. I will be off the air while walking. 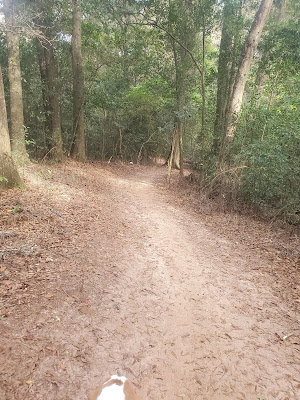 My priority on the HF bands will be 40, 20, and 17 meters, CW and SSB. I will also be on 146.52 FM simplex.  I like 7.031 and 14.061 on CW. For those in Panama City, 40 meters, NVIS is the best bet.
Note your grid square is part of the RaDAR exchange. Please give me six or more digits like EM71gf.
I plan to use the online RaDAR log in real-time at http://www.radarops.co.za/zsportal/  Option 2  Chasers can enter a RaDAR log online also and we both get credit. You need a PIN to enter your log. Contact Eddie ZS6BNE at edleighton@gmail.com for the PIN.
You can check my RaDAR log for my most recent frequency. On CW, you should also see me on Reverse Beacon Network http://www.reversebeacon.net/srch.php. Ham Alert can help too. See https://hamalert.org/about
RaDAR is challenging for the ops and chasers! RaDAR Chaser is now a RaDAR category.
If you have plans to chase or operate in the field let me know at lanekg@gmail.com.  The more ops and chasers there are, the more fun the RaDAR Challenge will be.
Good Luck,
Greg N4KGL
Lanekg@gmail.com
Posted by N4KGL at 7:04 AM