Go Ahead Make My Lunch

I have been setting up portable on my lunch break from work in Panama City Beach, FL. One QSO is a success. Today I worked ZS4RC in South Africa  15 meters band, 10 watts SSB with the Elecraft KX3. Of course that made my day or is it made my lunch. The KX3 is ideal for this mission. My antenna today was a 50 foot wire setup as an inverted Lwith a Balun Designs 9 to 1 Unun. The counterpoise is a ribbon cable with a quarter wave conductor for 40, 30, 20 and 17 meters. I make use of the KX3 internal tuner and it tunes on all bands. The tuner only does a few clicks to tune with the unun. I have gone without the unun and it tunes most but not all bands. So I would love to work you guys. I operate at 1730Z for about 30 minutes. No telling where I will be on the bands. Go Ahead Make My Lunch!

I spent Saturday morning with my local ham buddies operating portable at a park in Lynn Haven FL. See the post on W4RYZ.org While at the park, I worked Jim K4AHO in Orlando.  We had a pretty long CW QSO on 40 meters. Jim is heading up the QRP forum at the Orlando Hamcation. I had also worked Kelly K4UPG from Orlando last Saturday from the rocket Launch.

Sunday, I worked Bobby AK4JA on 60 meters PSK. I also worked Jim Clary ND9M in traveling in KY. He was the K3Y/4 just prior to my turn as K3Y/4. He also returned the favor and worked me.

Monday, John K4KQZ and I made some progress on setting up for a sked to work each other on 60 meters PSK. John and I go way back and meet each year at the Huntsville Hamfest. I also met a new ham to me on 60 meters KJ4UDD Neal in Dothan, AL. Any ham from Dothan is interesting to me as that is my hometown. Neal was running a KX3 on 5 watts for the QSO. So we have the same rig and he has an Alexloop like I do to boot. I hope to meet him to do some portable ops sometime.My last QSO on Monday was with Sonny WB4NKU in Ft Valley GA.

I also exchanged emails with Jerry N4EO in Tennessee and Tom WD0HBR from Dothan during the weekend.

So all these folks have me as a common friend. A small world story is at the August 2012 Monte Sano QRP event that Craig NM4T setup, Bobby AK4JA and Sonny WB4NKU were there. In fact, Bobby operated my KX3. We did not get introduced until recently when we met on 60 meters and pieced together that we were at the same place within a few feet of each other. It turns out many of the folks I mentioned here were at that event. I look forward to a return in August 2013. We all know each other even better now. I am also looking forward to Going to Orlando Hamcation with Marv KK4DKT and meeting Jim K4AHO and Kelly K4UPG and more of the QRP folks down there. It was a good three day weekend and I enjoyed all the contact with my ham buddies. I hope all of you had a good one.

I attended the January 12th SouthEast Alabama Rocketry Society launch in Samson, AL. Of course, I can't resist bringing the radio gear. I setup a 44 foot NorCal Doublet and the KX3. I was looking for Kelly K4UPG operating as K3Y/4 from Sanford FL. I found him as soon as I tuned up on 40 meters. I also worked K3Y/7 on 15 meters and checked into the SouthCARS net on 40. I was pleased to have Jim KC4HW, John KK4LST and James KE4GWW with his Son Tullis attend. All members of the Wiregrass ARC in nearby Dothan, AL. They got a great rocket show from the SEARS fliers and Tullis launched some of my rockets. I have recently gotten interested in fox hunting radio style. I tested out my yagi, VHF loop and offset attenuator all from Arrow Antennas. I find they work pretty good with my Baofeng UV-5R HT. Of course I knew where the Byonics MicroFox was located as I placed it myself. This was a warm up for the Orlando Hamfest Fox Hunt and future opportunities with the Panama City and Wiregrass clubs. Enjoy the photos. 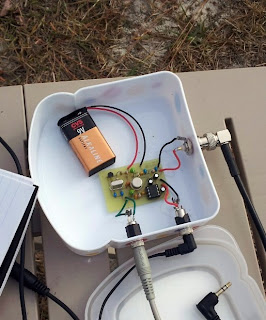 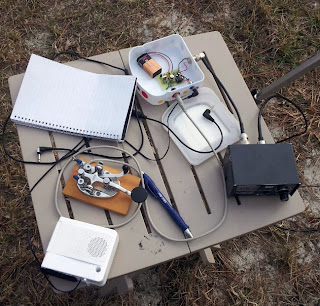 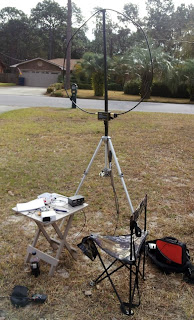 I always wanted to try the Norcal Doublet. It is built from computer ribbon cable. Since I am now interested in 60 meters portable, I decided to go for the long version which is 88 feet long.  For a test I went to the front yard and setup with a 31 foot Jackite pole in the center and 20 foot fiberglass poles at the ends. I am directly feeding it from the KX3 using the internal tuner. Since the rig is floating with respect to ground I don't think I need a balun. I found it tunes on all bands 80 through 10 except 30 meters that only got down to 2.5 to 1. A call on 60 meter yielded a contact with AK4JA Bobby in the Atlanta Area. We had a Q5 QSO with my KX3 at 5 watts and I am assuming his 817. Bobby is one of several QRP folks I have met on 60 meters. I think I will call this a success. You would need some room to stretch out the 88 feet. I bet it could work at 3/8 wave for 60 meters which would be about 66 feet. I also have enough cable left to make a 44 foot version. This really makes a nice portable pack-up. I hope to do some portable ops when the next nice day comes around. I located the ribbon cable on EBay. It was10 conductor 100 foot roll. You need at least a four conductor ribbon cable. Note the suggested tuner is a BLT tuner which can be found at QRPkits.com,  I 'd have to see if it covered 60 meters. 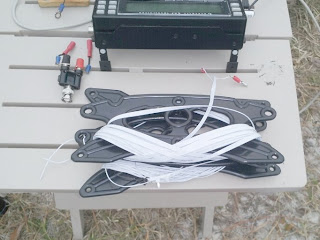 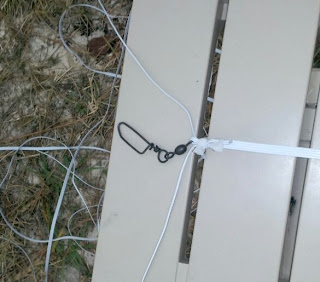 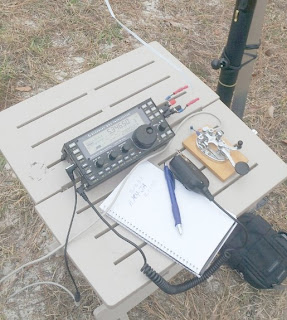 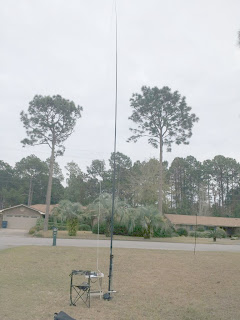 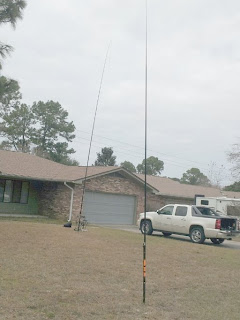 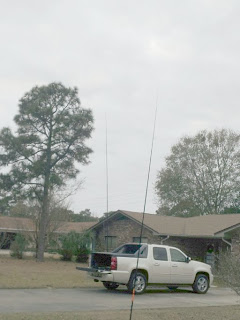