I finally did an Antenna Model with EZNEC

I had let my lack of patience delay using any kind of antenna modeling software. I could see the results others got for particular antennas, but I could not do it myself. With Field Day coming, I have many choices of antennas including dipoles doublets and end-feds. What are the radiation patterns for these antennas at the height I can raise them?  What will the Standing Wave Ratio (SWR) be across multiple bands?

I had some insight into EZNEC after listening to Roy Lewallen W7EL's QSO Today Podcast. Roy provides an EZNEC demo version. It is limited to 20 segments. For the simulation, wires are divided into segments. I was able to exercise the program's features by starting with the BYdipole.EZ model. "BY" means backyard. I found when I did more complex antennas, I got a warning to increase the number of segments. So I purchased the regular version EZNEC 6.0 which allows 500 segments.

It takes some effort to put the wires into EZNEC for complex antennas. I got lucky that EZNEC has a wizard to create the wires for a loop. I used that to create the four wires for square one wavelength 80-meter horizontal loop. That antenna is under consideration for the N4Y field day station a Falling Waters State Park. We have permission to extend our wires into an open field adjacent to the campsite.

Using EZNEC, I could see for myself that at one wavelength the loop is a cloud burner. That is fine with me. 80-meter has not yielded many contacts and using NVIS is just as well. The hot bands for field day are 40 and 20 meters. The elevation comes down to the neighborhood of 50 degrees for 40-meters and 30 degrees for 20 meters. Of course, you can just characterize the pattern with a few numbers. The patterns are pretty complex. Bob WB4BLX reminded me that L. B. Cebik W4RNL (SK) called this category of antenna HOHPL or Horizontally oriented Horizontally Polarized Large antenna.

I have not acquired all the insights required for antenna modeling, but at least I have a tool to assist. The big skyhook loop looks promising for Field Day if you have the room. It will take all my fiberglass poles to elevate 268 feet of wire twenty-five feet above the ground. The matching could be done with a tuner like the Icom AH-4 or it may be that a 2.5 to 1 balun will make the loop usable on its resonant bands 80, 40 and 20 meters. If I am lucky, I can deploy the loop here in town before Field Day to test the physical antenna

Countdown to the 2018 ARRL Field Day

It is now less than 30 days to the June 23/24 ARRL Field Day. My friend Dennis WA6QKN and I are looking forward to operating using callsign N4Y from Falling Waters State Park near Chipley Florida. I was at Falling Waters for the June 2017 ARRL Field Day and January 2018 Winter Field Day. My last two setups were limited to one pull-in campsite. This space limitation was the motivation for the 100-foot vertical loop that uses 30 feet on the ground. Last June, I used the Icom 7300 and last January I used the Elecraft KX3 on QRP. The loop works nicely with the Icom AH-4 tuner. I may lean toward the Icom 7300 for ease of use with the AH-4. 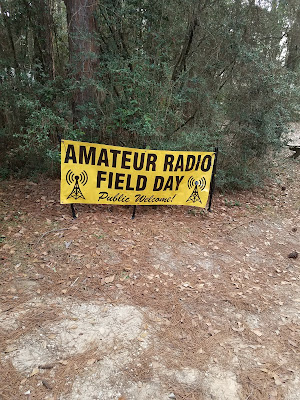 The new wrinkle is our reserved site is adjacent to a large open field. I got a green light from the park staff to extend our antennas into the field. So now I can start daydreaming about alternative antennas. Other than longer and higher is better, I don't have much skill in evaluating antennas. Unfolding the 100-foot loop and making it a 100-foot doublet is an idea. I could also go with a 40/20 fan dipole. What about an 80-meter horizontal loop on all bands? So having many choices is a dilemma. I can recommend the 100-foot loop for limited space based on using it for Field Day and other portable events. I still may go 100-foot loop and add a second antenna, perhaps vertically polarized, for diversity sake. 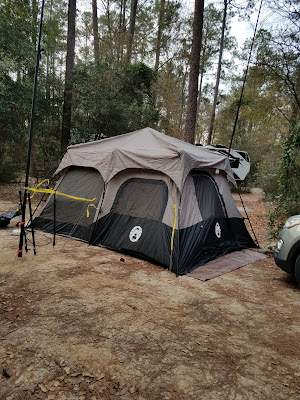 The QSO Today Podcast hosted by Eric Guth 4Z1UG is approaching two hundred episodes. It is quite a feat producing a weekly podcast consistently for almost four years. The secret is that Eric enjoys doing the interviews as much as his listeners enjoy hearing them. The fact is that Eric and I learn something new in each episode. Eric says the guests are the movers and shakers of amateur radio. He is right, and there is an endless list in this hobby. Eric starts with how each guest started in ham radio. From there, Eric explores the unique talents and accomplishments of each guest. There is a tier of guests you have heard of like Bob Heil K9EID and Wayne Burdick N6KR. But the guest list is deep and wide. They include QRPers, DXers, contesters, homebrewers and more. 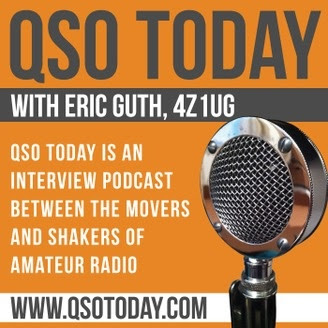 I am getting about an hour of access to these guests per episode. It is access that only those who run in their circles would have. Eric is on a mission to capture an oral history of the ham radio experience. He gives older guests priority. I was sad to hear about the recent passing Art Bell W6OBB. Eric recorded Art's story about two years ago. Art had an exceptional story in ham radio and broadcasting.

I particularly enjoy guests that played a role in or witnessed history first hand. Examples are


Likewise, I am in awe of accomplishments of sight-impaired hams like Ron Milliman K8HSY and Jim Kutsch KY2D. I learned about contributions of YLs like Carol Perry WB2MGP and Ellen White W1YL. Don't miss Dennis Blanchard's K1YPP story of ham radio and the Appalachian Trail. Explore the philosophy of life and ham radio with Mike Rainey AA1TJ. Also, learn the origins of RaDAR with Eddie Leighton ZS6BNE.


I missed out on the hobby for 25 years and never had Elmers in the realm of DXing, Contesting and homebrewing. Now I know what Mult-Multi, SO2R, and WRTC are about. I previously had no clue. If you want to enjoy these podcasts for their Elmer value, you will just have to find the time. I take advantage of time in my vehicle. Frankly, I am guilty of binge listening. I pick up more gold nuggets on the second listen. I am on a quest to recall the stories from just the name and call. It is my memory exercise.

Thanks to Eric and his guests, for these podcasts. Please accept my congratulations in advance for two hundred episodes. They are enhancing my ham experience immensely.