Amateur Satellite Contact with a HT and a Whip Antenna

This is the case of many ideas coming together from hams that share. I discovered the RH-770 antenna while reading.
"VHF, Summits and More: Having Fun With Ham Radio" by Bob Witte K0NR. Bob has had success with this extra-long antenna doing VHF SOTA activations. I bought the HYS BNC model on Amazon for $17.

My handheld radios have SMA connectors. I was tipped off by Bradford K6LCS on work-sat.com about the Gulyas SMA to BNC adapters. I feel pretty good that I can manage such a long antenna with the Gulyas adapter on my HT. The RH-770 is about a yard long. It telescopes and is not that heavy. A check on two-meter simplex has confirmed much that the HY-770 outperforms my other HT antennas, even the longer ones.

Given the enhanced performance of the RH-770 antenna, I wondered if I could use it to work one of the FM birds like AO-91 or AO-92. So I dashed out to the front yard for a pass of AO-91. I was using the RH-770 and my Yaesu FT-60 handheld. I use a speaker/mic to allow me to move the antenna around for the best reception and still talk.

On this pass, Denny K5DCC was on. I enjoy listening to Denny's interviews on the Digicomm Cafe Radio On The Rocks Podcast. Denny promotes the sats on his shows and often interviews hams he meets on the birds. I gave Denny a shout, and he called me back just as AO-91 was going out of range. I held the FT-60 over my head and vertical at that point.

Any time I make an FM sat contact, I consider it a stroke of luck due to the congestion on the passes. Thanks for the QSO, Denny.  I'll see if I can repeat this feat again. It is much easier to grab the HT with a whip instead of my Elk log-periodic antenna.

Here in Florida, we are under a Stay-At-Home order due to the Coronavirus. This thwarts all social activity. In particular, the beaches and state parks are closed. Fortunately, recreation like cycling is allowed. So Dennis and I made our RaDAR Challenge plans and chose Conservation Park near Panama City Beach as our venue. This park has miles of trails suitable for bikes.


I chose to go with the Icom 7100 as our HF rig. The antenna was the SOTA Beams Band Hopper link dipole supported in the center by the SOTABeams Tactical 7000 telescoping pole. I brought an angle iron stake with a small hammer to pound the stake in the ground. As you can imagine this is not backpack gear. I loaded the rig in a toolbox that fits on my bike trailer. I also put a 40 amp-hour Bioenno LiFePO4 battery in the toolbox. I could have gone with the Elecraft KX2 in the backpack but nevertheless, I brought the big guns. In addition, I packed a Kenwood D710 into the toolbox for VHF. It will do packet comms with its built-in TNC. It is also a full-duplex radio for the FM satellites. I brought a SOTAbeams Travel mast and a rollup J Pole for the VHF antenna.

Local contacts are valid for RaDAR. We made a lot of those of VHF and HF. It is nice to involve my nearby ham friends in the RaDAR experience.

We rode our bikes to the first stop at EM70BG22 and setup. The four-hour clock started at 10 am. I manned the radio and Dennis did the logging. We worked W4IMH, W4NNO, and N4ROJ on two-meter FM simplex. Frank W4IMH was about 40 miles away in Fountain, Florida. To finish the five we worked two Missouri QSO Parrty stations on 40 meter SSB.


At the second stop at EM70BG26, we worked my RaDAR friend John VA3KOT in Southern Ontario on 20 meters CW. The next three were QSO Party stations on 20 meters SSB and the last contact was Mark KD4IMA on two meters simplex.

At the third stop at EM70BG19, we tried the Noon pass of the AO-92 and AO-91 FM Satellites. The rollup J pole did a fair job on receiving. I heard myself of the downlink at times. However, with the congestion on the satellites, we had no luck. We then worked Bob WB4BLX and Rick NZ2I on two-meter simplex and also on 40 meters CW. The last contact was Nebraska also on 40 meters CW.

We doubled back for the fourth stop at EM70BG26. At this stop, we tried a two-meter packet contact with Bob KK4DKT in Lynn Haven. Despite the luck we had on simplex voice we could not connect with packet. We did pick up KK4DIV, N4STC, on two-meter simplex. On 40 meter SSB, we got KK4DIV, N4STC, and KD4IMA. We stayed on since he four hours was winding up and we worked George W4GHG in Lynn Have and a Tennesse and Louisiana contact out of town.


Our bike transitions of two kilometers took about ten minutes. I estimate our setup and teardown were about 15 minutes each. With the support of local hams, it did take long to get the five contacts. We got in four stops in four hours. The toolbox packed with radios and battery is my go box for emergencies. Two-meter simplex, as well as HF, worked well for local contacts. There were friends around the country looking for us but missed us. Spotting ourselves proves difficult.

Chris VA3ECO has taken up RaDAR and was out for three hours and did two locations. There is still snow on the ground up there in Ontario, Eddie ZS6BNE had success on the satellites in South Africa. See his blog.

With the Corona situation giving us cabin fever, it was enjoyable to get a dose of radio and exercise outdoors doing the RaDAR Challenge.

Our RaDAR Challenge Operations are On for April 4th!

The RaDAR Challenge is a portable amateur radio operating event with movement between deployments via foot or various conveyances. Operate in a four-hour window of your choosing in the UTC day. No specific venue is required, although parks are a natural choice. You may operate any band and mode except repeaters. Satellite and digital contacts are encouraged with bonus points. You must make five contacts to move to the next location. The rules are available at http://radarops.co.za/index.php/radar-rules/.

The April 2020 RaDAR Challenge is this Saturday. Normally we would be operating from a State Park, but the Governor closed the State Parks due to the COVID-19 situation. Per the Gov. DeSantis' 4/1/2020 Executive Order "Essential Activities" as: "Participating in recreational activities (with social distancing guidelines) such as walking, biking, hiking, fishing, hunting, running, swimming, and taking care of pets." Therefore I believe RaDAR is essential. Fortunately, Conservation Park in Panama City Beach is open. There are miles of dirt trails for hiking or bike riding. This park is an excellent fit for RaDAR. 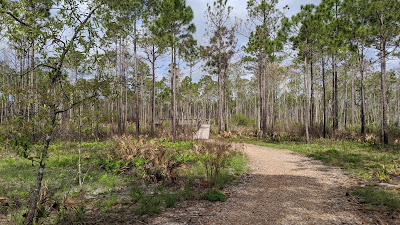 Dennis WA6QKN and Greg N4KGL are doing the RaDAR Challenge on the Osprey Trail in Conservation Park. We will ride bikes between stops carrying our radio gear. Our callsign will be N4KGL and our four-hour window will start at 10 AM CDT or 1500 UTC. We must make five contacts to move down the trail. The required distance on bikes is two kilometers or 1.2 miles. We will look for contacts anyway we can get them that includes RaDAR to RaDAR, local contacts or search and pounce. Our first choice for HF is 40 meters followed by 20 and 17 meters, CW will be around 7.030 and SSB is TBA. On VHF we will announce our ops on the 145.210 Repeater. Simplex contacts will count so switch over to 146.565 FM to work us. We can work you on multiple bands modes and multiple stops.


If you will be operating RaDAR or chasing us sent me an email at lanekg@gmail.com and I will send updates to your email. We appreciate the efforts to find us. It can be challenging.

Have a great weekend and have fun on the radio.