Tres de Mayo is QRP To The Field.

Spanish explorers gave the St. Andrew Bay near Panama City Florida its present name in the 1500's as they explored the northeast gulf coast. I am planning to operate QRP TO The Field on Tres de Mayo or May 3rd. I will be headed to Sandy Point at St Andrews State Park on the bay. I like Sandy Point because good deal of the azimuth is salt water. The Spanish tie in will put me in the QTTF Fiesta Category. See See this link for all the rules. The RaDAR Community will be having their Monthly On The Air Meetup to coincide with QRP To The Field.

I am looking forward to many QSOs and will enjoy the outdoors. Join in if you can!

I have an Icom IC 7100 as my base rig. However being such a fan of Rapid Deployment Amateur Radio (RaDAR) I can't resist setting it up in a Go Box configuration. Basically I am just packing the gear into a toolbox. I can have the main unit and the battery in the box and the control head on my table.

My battery is a Bioenno LiFePO4 15 amp hour battery. This battery sustained the KX3 at 10 watts for the entire Field Day last year. The Icom 7100 presents some additional challenges for battery operation. It does not seem as battery friendly. The first issue is the Icom 7100 is specified at 13.8 volts plus or minus 15%. This means the lowest voltage is 11.7 volts. I find that when it drops below 11.7 the rig will abruptly shut down. I guess they did not promise anymore than that. It is pretty easy for this to happen due to the voltage drop due to the internal resistance of the battery. I estimate the internal resistance of this particular battery is about .12 ohms. A 10 amp draw could drop the voltage 1.2 volts. This combined with losses in wiring gets you in trouble pretty quick. The bottom line is you will get the rig shutting down even through you have lots of energy left in the battery.

There is something you can do to mitigate this issue. Enter the N8XJK Boost Regulator. I have one in the Go Box. It does what it promises. It will take what ever the battery voltage is and boost it to 14.14 volts open circuit (Adjustable up to 15). Under load it seems to keep the voltage above the 13.8 point.

I think it is fair to say this 15 ah battery may be a little small for this job. It is not sized for the 22 amp draw for a hundred watts. But I am thinking maybe 40 watts SSB and 20 watts CW just to not push it too hard.

Then there is something that was surprising. If you turn the power down to QRP the 7100 is still draw six amps or so. So you won't economize by shifting to QRP. All this makes me appreciate the job Elecraft has done on the KX3. It will reduce the power instead of shutting off. It is also very power efficient. Oh well this makes me think the Elecraft 100 watt amplifier would be something to look at. Then running more than 10 watts portable is questionable anyway for casual operations. However, Field day is coming and I plan to exercise the 7100 at 40 watts and see how it does.

I have some photos from when I took the 7100 Go Box out on my lunch break. I talked to locals Vic K4GXV and Bob WB4BLX via DStar on 2 meters. I did not get around to doing HF. The antenna is a lightweight roll-up slim-jim. 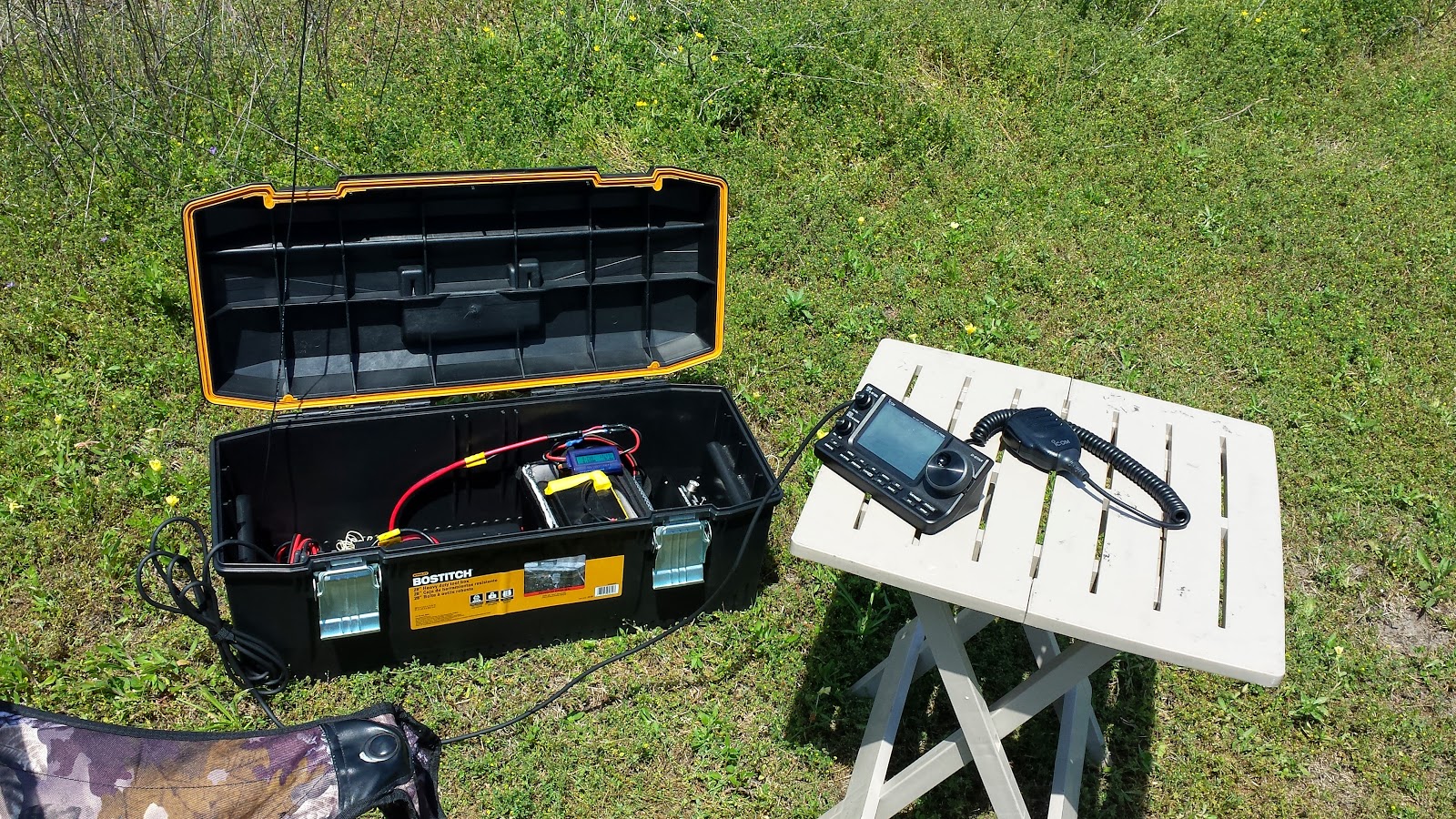 My site for the April 5th RaDAR Contest was Saint Andrews State Park near Panama City Florida. See my log entry below. My strategy was to wear my KX3 and battery and walk with the Alexloop deployed. I call this Semi Pedestrian Mobile. It was threatening rain but the rain never came. First I made five contacts on the beach near the jetties. Then I walked up the beach one kilometer and made five more. Then I headed back to the jetties and went to a gazebo where I could sit. I got five more contacts for a total of fifteen jover the four hour period. I think everyone I passed was just a little interested in what I was doing. Several asked and were very friendly.  I think my choice of the Alexloop paid off. There was less setup time and more time for contacts compared to erecting poles for antennas.

I worked a fellow RaDAR operator Steve KF5RYI  in Texas. The RaDAR Contest was fun and challenging. Speaking of other operators they were global from Fred VE3FAL, Lucy M6ECG to Eddie ZS6BNE and others you can find their stories on the RaDAR Community at this link. The RaDAR America Rules are at this link

Plan RaDAR, Do RaDAR and Learn from RaDAR

RaDAR is Rapid Deployment Amateur Radio. The first Saturday of April and November is designated for a RaDAR Contest. The contest is four hours.  The focus is on portable operations but with a twist. After five contacts you must travel a specified distance and redeploy. My choice was to redeploy by foot. Operating in this fashion invokes many tradeoffs on your gear and your antennas. If you are like me you will ponder these tradeoffs right up the the start of the contest.

For the RaDAR contest last November, I laid my bets on getting end fed wires as high as possible. I used 31 foot poles and deployed some impressive antennas. I also bought a beach cart to carry my poles and other gear. My site of choice is Saint Andrews State Park. Even though it was a beach cart it became a big chore to cover the required one kilometer distance. This was because nothing rolls that well in loose sand.

So now why not use that Alexloop. That is what I chose for this year. It is definitely easily transported and setup. But why set it up and break it down. That led to what I call Semi Pedestrian Mobile. I just leave the loop setup on a pole and carry the pole. Also I wear the radio and the battery. This eliminates a table and a chair.

There was some drama this year because rain was in the forecast. I got in my mind I should have some back up antennas which I prepared but did not need them. I suspect operating under some cover with the loop is just fine in any case. So it finally came down to the contest day. The beach at the park is beautiful and I like to think being close to the surf invokes the saltwater effect.


In short, I made five contacts near the jetties walked up the beach one kilometer, made five more then headed back to the jetties and went to a gazebo where I could sit. I got five more contacts for a total of fifteen just in time. I think everyone I passed was just a little interested in what I was doing. Several asked and were very friendly. I feared rain but it never came.  I think my choice of the Alexloop paid off. There was less setup time and more time for contacts. My lesson is NEVER DOUBT THE LOOP!

I worked a fellow RaDAR operator Steve KF5RYI  in Texas. Speaking of other operators they were global from Fred VE3FAL, Lucy M6ECG to Eddie ZS6BNE and others you can find their stories on the RaDAR Community at this link.