Congrats to all participants in the April 2014 RaDAR Contest. RaDAR is Rapid Deployment Amateur Radio. There were several who missed this one due to the timing and the weather. There will be a July and November RaDAR Contests coming up this year. Check blogs http://zs6bne.wordpress.com/ and http://radar-america.blogspot.com/ for details. Likewise check out the Google+ RaDAR Community.

I collected the following soap box info via the RaDAR Community:


Lucy M6ECG
Holland-on-Sea, Essex JO01OT
Terrain: all paved along the promenade and sea wall defences (as high tide at time of contest)
WX: lovely sunny and warm (12 degreesish ?), very light breeze
Radio: Icom IC 703
Power: 17ah SLAB
Antennas: AM Pro mobile whips for 20m & 40m and a DV27 11m mobile whip for 10m
Modes: SSB exclusively
Transitioned: walking
Interesting, surprising, fun stuff ... Lots of 'funny looks' from passers by = funny, some very nice QSOs with contacts, surprising that that the big Polish contest did not impede my operation in any great way!
While out contesting .... I was thinking a smart phone would be useful for locating exact grid references while out and about and for updating on forums etc Also useful for digi modes which I want to try and start sometime, Also some simple way to record video/audio all QSOs so that a nice compendium of snippets of call signs can be edited together after a portable outing would be nice.﻿

Eddie ZS6BNE
Molopo river - KG34ac19fk
Flat, bush veld - Late summer, pleasant
Radio: FT817ND
Power Source: 7 A/Hr Gel cell (For lack of something better)
Antennas: 10m Wire J-Pole and "Fuchs" end fed
Modes: SSB, CW - Attempted PSK31 digital
Transition: Mountain bike
Highlight: To set up station in the field and to communicate effectively. Chasing the ultimate goal of intercontinental RaDAR to RaDAR. To overcome hardships encountered and adapting to unknown situations. To follow a plan and strategy and to learn new ways to do things. There is always something new to be learnt!﻿

Richard S. - KF5RHI
Bicentennial Park, Fort Worth EM12hn
City park and suburbs, Cold and rain
Radio: Yaesu FT-857D
Power Source: Two 10 Ah SLA batteries
Antennas: 6 - 40m end-fed on a 28' telescoping jackite pole
Mode: SSB
Transition: Shoot and scoot!  After 5 contacts antenna and radio was tore down and loaded into the truck.
Highlight: One of my contacts was in the Azores.  That's the first time I've ever worked the Azores!﻿

Steve Parks KF5RYI
Location Name and Grid Square Type of terrain and Weather
Cedar Hill State Park,  EM12MO06 and EM12MP03, overcast and cool.
Radio: Elecraft KX3
Power Source: Tenergy LiFEPO4 10 Ah (Greg Lane Special)
Antenna: Homebrew EARCHI EFHW
Mode: CW and SSB
Transition: By foot
Highlight: Having people inquire what I was doing and the look of total shock as I explained.  It was also super awesome to contact a couple of G+ RaDAR members.  Although I will admit I didn't know it was +John Corby at that exact moment.﻿

Jack Chomley VK4JRC
QG56FJ time zone +10 fine weather, night time, farm terrain.
Elecraft KX3 @ 5 watts
Off grid solar
1 kilometre horizontal loop, Cushcraft MA-5V vertical, PAR Omniangle
PSK31 only
"Shack Sloth" at club field facility
Due to night operation in my time zone, moving RaDAR ops not safe, weather very warm here, snakes are a big hazard. I used digital because propagation to this part of the world at this time is poor so I felt best chance was with digital. Only called CQ RaDAR and did not search and pounce, I got no contacts at all. Many that I did listen to, were very weak sigs and all running about 20 watts. I tried 10, 15 & 20 metres only.
See www.cqara.org.au for pics of Weasel Park field facility, where I operated from.

Don Gibbs KK4QAM
I had a great time today on my first truly portable op. I setup as a fixed/p operation not far from my home QTH. Things were slow at first but picked up some later on. I  took 3 different antennas with me today to do some experimenting and the results were as I expected. The home brew Buddipole is going to be a very good NVIS style antenna around my QTH due to the lack of elevation as it is with any dipole antenna. The End fed Trail Friendly 40/20/10 works well set up as a sloper since I did not have a tree tall enough to use it as a vertical. I did not take time to try it as an inverted L. I also have a home brew Buddistick, but did not take it today, because I had a vertical wire based loosely on the antenna. I made it out of #18 speaker wire and use a cardboard winder to keep it on. I still have a little more work to do on the Buddistick before I feel confident enough to take it into the field. The X1M is doing a great job for me and I am planning on getting a TNC for it to run PSK31 in the field. I finished the day with 3 contacts. AB6Z-Thomas in MS, N1GMV-John in NC and N0YCA-Pat in MO. Pat did not get my grid due to the band fading out but I did get his. I had a good copy on KF5RHI-Richard in TX but he could not hear me.I hope that the pictures attaché are good enough to see some of my operation from today. One is the Buddipole and radio setup, one is the matchbox end of the trail friendly, one is of the radio and radio/battery box, and on is of the vertical wire and counterpoise being fed by a BNC to binding post adapter.

Gord Kennedy
Made my first km across the icy trail to a spot where the maple sap had been running, set up my Bitx20 and heard 2 YV's having a rag chew at 14.200 59++, I decided to move up the band when disaster struck. The vernier for the VFO fell apart in my hand!! There I stood

John Corby VA3KOT
Not a great contest for me. Temperature at the start was -4C rising to -1 by the end, but strong winds made it feel much colder. We have had some thawing here and that has created a lot of mud. So I decided to leave my backpack behind and operate from the warmth of my basement shack.

I tuned around the QRP frequencies for a while but didn't hear any RaDAR stations so I went into hunt and pounce mode on the Mississippi and Missouri QSO Parties. The bands were up and down but I managed to get 7 SSB QSOs and one difficult CW RaDAR contact with Steve KF5RYI whose signal was affected by QSB. I sacrificed some points by blasting out my signal at 100W from my FT897.

Spring seems to be making a timid appearance here in southern Ontario so I hope to get out soon and do some field ops. I am definitely getting some snowshoes for next winter; it's been a long time since I got out on the trails.﻿ 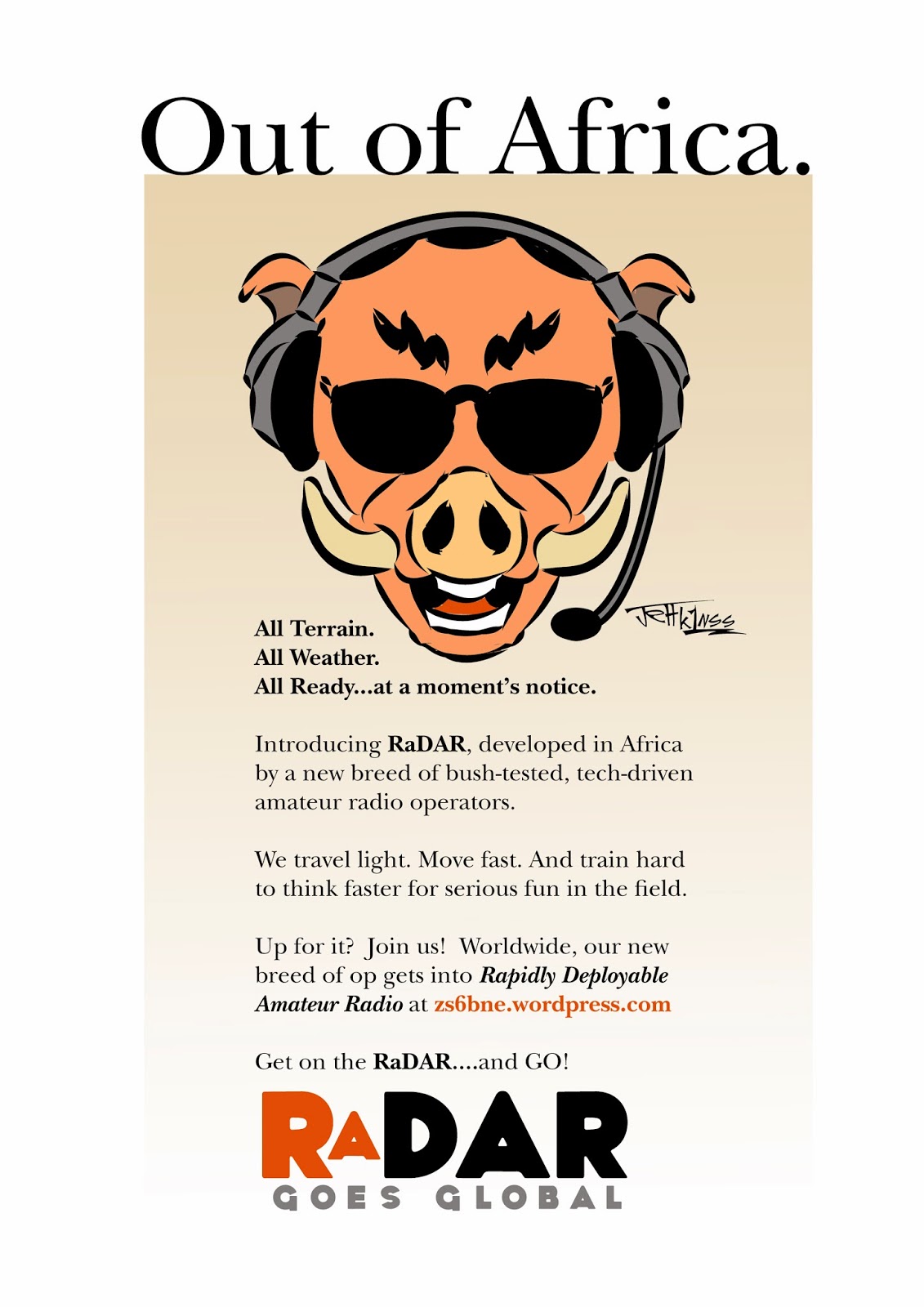