Field Day is the event that goes all the way back to my early Ham days in the late 60s. There was a club in my hometown but the members left field day ops to me and my teen ham buddies. I always feel like I should be preparing for field day all year round. It is similar to preparing for RaDAR outing by doing quick setups for lunch breaks at work. St. George Island has many RaDAR opportunities for deploying and redeploying but Saturday was closer to a field day than RaDAR.

Perhaps one motivation for getting an Icom 7100 was to have a 100 watt rig for Field Day. Neverless I had the KX3 and the Icom 7100 with me Saturday so why not setup both. Then why not setup two antennas. Sounds like a two operator field day with one one operator. The antenna setup was interesting. The first antenna was the ribbon cable "NorCAL" 88 foot doublet. It was needed for 40 and 60 meter NVIS. I setup the doublet with the center pole at the picnic table operating position. I oriented the antenna to be broadside to Southeast and Northwest. The second antenna was the 100ft wire delta fed at the bottom center the SGC 237 tuner. In order to minimise interaction between the antennas. I ran 70 feet of coax along the axis of the doublet and deployed the delta loop perpendicular to the doublet off the end. Neither of these antennas are much trouble to deploy.

The other aspect of this outing was I invited my ham friends in the area and my RaDAR friends to work me. This was a "This is your Life" experience as my friends showed up one after the other. The 88 foot doublet was exactly the right antenna for my area friends. On 40 meter CW Jim K4LIX in Panama City was waiting for me on 7.120. Then my buddies reported in including Kelly K4UPG in Sanford, FL, Bob WB4BLX and Vic K4GXV in Panama City. Tom WD0HBR in Dothan, Alabama. On 40 meter SSB I worked Bob KK4DIV, Phil N4STC, Jim K4LIX all from Panama City. I also worked another Panama City ham Henry N4HHM maritime mobile.  After a few more 40 SSB contacts including my friend in Sonny WB4NKU in Fort Valley Georgia, I had the pleasure of RaDAR to RaDAR contacts with Rickey KC4S visiting  Pensacola using his KX3. Then RaDAR to RaDAR with Don KK4QAM in Alabama on his X1M. All in all I had a run of 17 contacts in Alabama, Florida, Georgia and Louisiana. Thanks to all you ham Radio Buddies this was lots of fun!

The rest of the day was picking up QSOs alternating between the KX3 and 7100 and then the two antennas. I had a extended QSO with Des KB8UYJ in Ann Arbor Michigan. He was really interested in the KX3. So I switched from the 7100 to the KX3. Eventually I got both rigs on the delta loop. Surprisingly he said the KX3 at 10 watts was just as strong as the 7100 at 80 watts. Elecraft will be happy to know the KX3 at 10 watts sounds like a 100 watt rig. I think it might have something to do with the compression on the KX3.

The day was topped off with a try to work my 60 meter QRP buddies Larry K5ZRK in Mississippi and Sonny WB4KKU in Fort Valley Georgia, I did not hear Larry but Sonny in Fort valley was solid copy on the 88 foot doublet.

The temperature was into the low 90s but the 50% humidity made it not so bad. At one point the KX3 gave me a temperature warning between the sun beating down on it and a long transmission. I checked on the crabs I had seen last week at the waters edge. It turned out they formed a huge ball of crabs in the grass. If I got closer the ball moved further out. I decided to give them some privacy.

It is beyond my capabilities to make accurate comparison of rigs and antennas. However, I can say the 88 foot doublet was a GREAT antenna for close in 40 meter contacts and also for 60 meters. The delta with the tuner is at least a FAIR antenna for the high bands. I made a good number of 20 and 17 meter contacts with it. The advantage of 80 watts over 10 watts continues to be in question. The direct comparison said 80 was the same as 10 as far was carrying on the QSO. The battery power for the 7100 held up well at 80 watts. I used 10 amp hours from the 30 amp hour battery.

A great day of operating with 34 contacts total. I think in future trips I'll go for lightweight and see if I can practice some RaDAR redeployments. 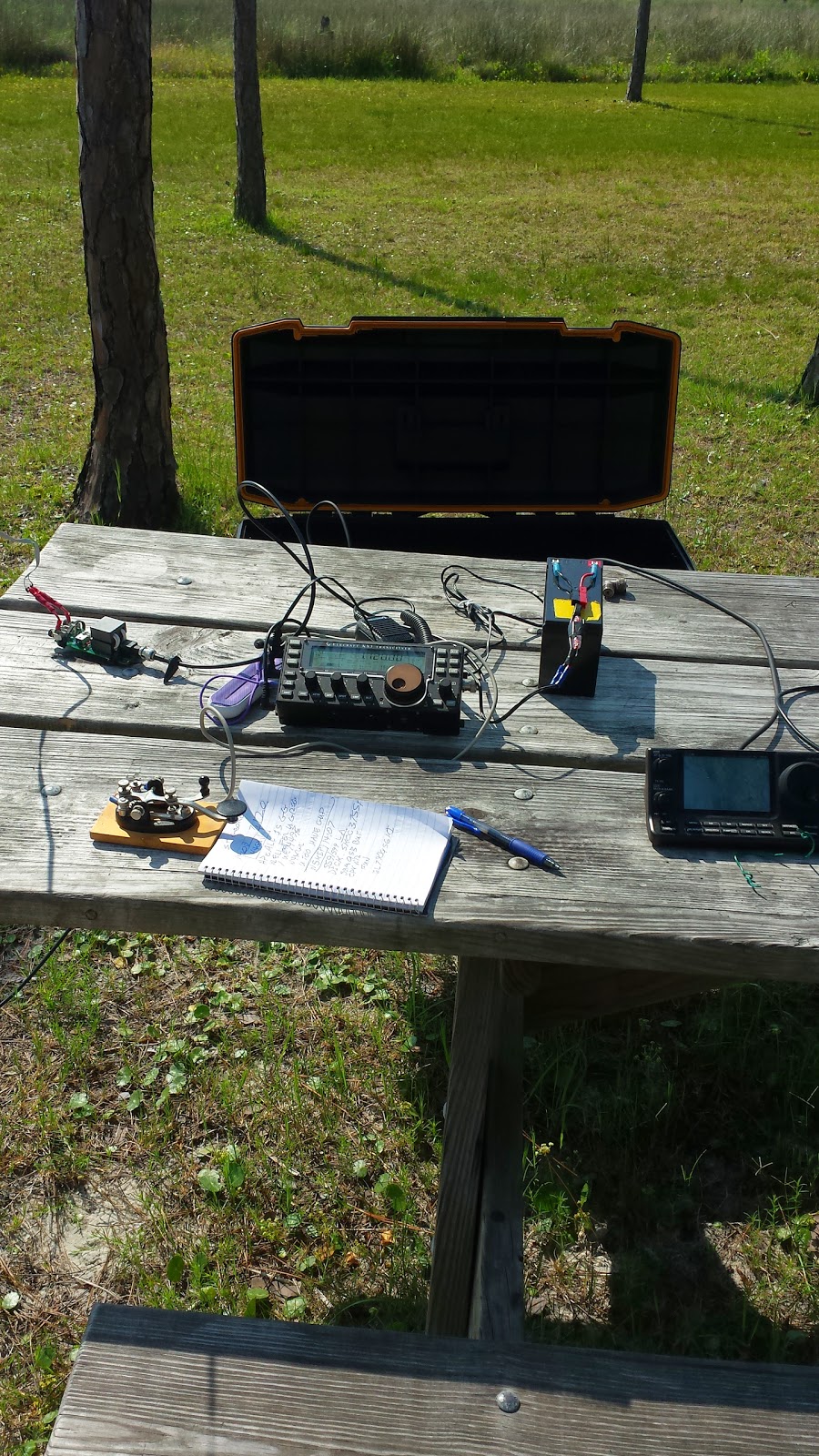