The February SKCC Weekend Spritathon from the Dothan Shack

For the Straight Key Century Club February WES, the theme was boat anchors, another name for vintage rigs. I operated from the Dothan Shack sixteen hours on Saturday of the thirty-six possible hours for the WES. There were a couple of slack hours for lunch and dinner. I decided to stop at one hundred contacts. 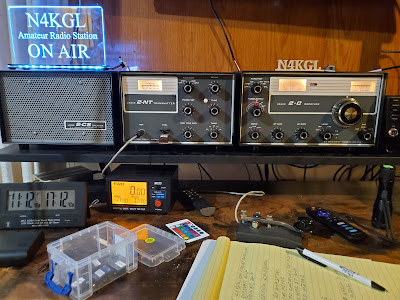 The first 45 contacts were using the Drake 2-NT and the Drake 2-C which let me give out a nine tube bonus to the other ops. I did not work any other tube stations, although I think they were out there. You have to run when you use xtals instead of hunt and pounce. By the way, I ran right through a storm of RTTY QRM. About mid-course, I switched to the Elecraft KX3 and KXPA-100 and did some hunt and pounce.
I worked two Dothan locals, Alton W4IDH and Tom WD0HBR. I also worked Costa Rica for a DX contact. The pace really picked up when 80 meters opened up Saturday night. We all had room to spread out. See the attached score. The SPC count of 33 was pretty good. It is nice to see how popular the SKCC is and have so many ops show up on straight keys and bugs
Posted by N4KGL at 12:58 PM