Our Winter Field Day venue for 2021 was Three Rivers State Park, Florida on Lake Seminole. Four other hams from the Panama City area had campsites there as well. We chose to operate under our own calls. I decided to operate QRP using my Icom 705. 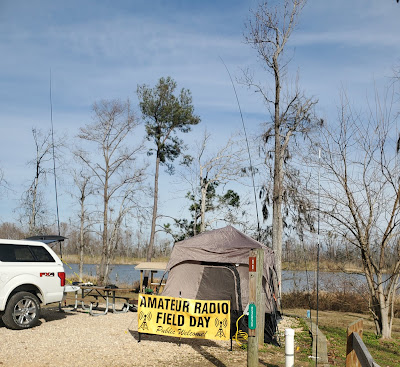 I considered about eight different antenna options and could not make up my mind. I consulted my antenna mentor, Myron WV0H in Colorado, and he suggested two more options; a loop and an inverted-L. I took his advice on the inverted-L. I implemented my inverted-L with a 100-foot radiator supported by three Jackite 31-foot poles. I had about 27 feet vertical and about 73 feet horizontal elevated at 31 feet. I used Myron's favorite wire which was 26 gauge. This thin wire presents almost no load on the poles and is practically invisible. The counterpose was 31 feet long elevated at about ten feet. That length was just what I had handy. My Icom AH-4 matches the inverted-L antenna on 80 through 6 meters.

I had WFD contacts on 80, 40, and 20 meters. I did not feel it was a struggle making contacts even on SSB at ten watts. I believe this setup will be my Field Day go-to from here on out. It took up about half of the horizontal distance of my previous go-to which was an 80 meter End Fed Half Wave. I also did not have to support the EFHW transformer with my camo pole tripod mast. Those camo poles are heavy and take up a lot of room in the truck.

Given all this, I made 54 contacts. I did not get into a good rhythm until Sunday. Of course, we had interested visitors, great social time, and I took Saturday night off. As you expect, we all dealt with interference among our stations. Score-wise my contacts would be the equivalent of 108 contacts at 100 watts. It was enough to get a taste of the action. The bands were quite busy. For me, it is the experience, not the score.

All the campers including Ryan K1OSE, George W4GHG, Daniel K1MDA, and Bob KK4DIV said they had fun and are looking forward to the ARRL Field Day in June. Chris VA3ECO did not come down to Florida this year. However, he braved the elements in Ontario and drove out on a lake ice road to make his WFD contacts. All of us are going to have our scores applied to the Panama City ARC aggregate score.

Linda and I have our own travel trailer now and we can take Suzy, our basset She has a blast greeting the campers and claiming our bed. Linda and I continued to East Bank Campground, also on Lake Seminole, for a few extra days of camping. We liked that campground so much it may be my venue for ARRL Field Day in June. While at East Bank, I deployed the same inverted-L I used for WFD. I had some good QRP QSOs there. I am glad o many hams from our club enjoyed WFD from the field and some from home. We are looking forward to more camping and radio including the Florida QSO Party in April and the ARRL Field Day in June.