For the first time, I will do a team effort for the RaDAR Challenge. Dennis WA6QKN and I will use our own calls and combine our contacts. We will make at least five contacts together and move by foot to the next location. We will only take credit for contacting a station once per band per mode. We may run a VHF station and HF station concurrently. This team effort is an experiment and perhaps the rules can be amended in the future to account for RaDAR teams.

Our chosen site is St. Andrews State Park near Panama City, FL. I have shown three stops A, B & C on the photo below. The distance between them is one kilometer. We will progress through the stops A-B-C-B-A as far as we can in 4 hours. The four hour period will be 1400 - 1800 UTC. We have the option to extend our outing and keep going after the four hours if we like. RaDAR transitions over 24 hours count for the special WWFF-KFF POTA RaDAR Awards. The park is reference KFF-1917. 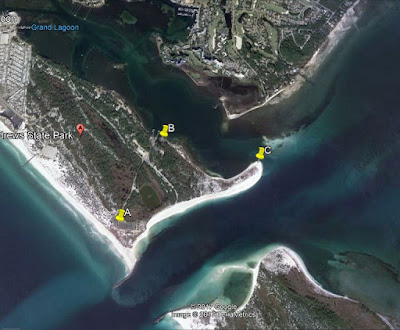 At the first stop A, I will attempt to work five stations on the FO-29 linear satellite on SSB. This will require my Icom 910H and an Arrow Antenna. the pass info is

I will return the sat gear to the van after the pass. The 1st sat contact will count as a bonus.

We will rely on a KX2 at ten watts on HF. The HF antennas will include a low 40-meter dipole with 10-foot poles, an N6BT Bravo 7K vertical and an Alex Loop magnetic loop. I have a beach cart to carry the antennas that will double as a table.

I provide more details to coordinate local and RaDAR to RaDAR contacts as we get closer. Good luck to all participants and chasers. Be Safe!