Chasing Memories From My Teenage Days in Ham Radio UPDATED

One of my teenage ham radio memories was a  program on Alabama Educational Television. The program was received at my Dothan, Alabama home directly from WDIQ Dozier, Alabama about 60 miles away. There was no cable back then. The show played a part in my getting my license or at least increasing my knowledge of amateur radio. It was wonderful that ham radio had an on-air TV presence.The format of the show was a segment on electronics theory followed by a segment of Morse code.


Initial Google searches were unsuccessful as it was pre-internet and I had little to go on. I did think the main instructor was named Herb. I had listened to Don Keith's QSO Today Podcast.and he mentioned that he worked for Alabama ETV while attending the University of Alabama. I enquired with Don via email. This was Don's response:

Thanks for the note.  Indeed I do remember the show, though I only saw a few segments. I was already a ham then…got my license in ’61 when I was 13.  The host was Herb Coleman and it was done right here in Birmingham at the WBIQ channel 10 studios.  His call is W4AVX and he is apparently still alive and kicking, living in Mobile:https://www.qrz.com/db/W4AVX

I give the show credit for there being so many active hams in our area.  That and, of course, the fact that “ham” is BirmingHAM, Alabama’s middle name!

A friend of mine, Jim Brinson K4WOP, was also on the show occasionally as a kid, helping with the teaching of Morse code. He is still very active and I sometimes chat with him on CW.  See https://www.qrz.com/db/K4WOP

I actually paid my way through college partly by working at Alabama Public TV, at the production facility at the University of Alabama.  Part of my job (In addition to saying, “This program comes to you from the University of Alabama” in my best announcer-ish voice) was to do the legal station identification. We had to name all the stations around the state and I especially enjoyed saying “Dozier” and “Mount Cheaha.”

Now I put google back to work and I found this in the June 1969 Popular Electronics Archive: 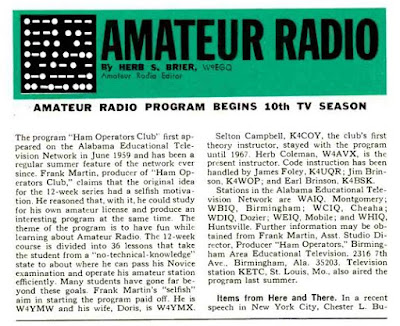 Herb Coleman's QRZ page has this note about the show:


Later I enjoyed teaching classes in morse code and electonic theory for obtaining an amateur license. A highlight for me was having the opportunity to teach morse code and electronic theory on public television during the late '60's and early 70's. The program was called "Electronics and The Radio Amateur".

A deeper Google search yielded this picture of Herb. I am pretty sure it is the same, Herb. It is from West End High School in Birmingham. 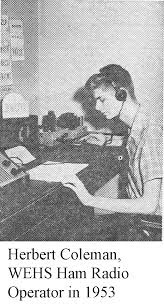 Herb is now retired and living in Mobile, Alabama. He had a lot to do with the engineering side of TV in Birmingham. I certainly appreciate his help to educate me about electronics and ham radio. I still hold out for a clip of the show on video. I hear there are none. Still, I search YouTube. Hi Hi!

I received an email from Herb Coleman W4AVX himself. He was complimentary of the post. Herb confirmed the picture above is him. This memory chase went right back to the source. Thanks, Herb!
Posted by N4KGL at 7:32 AM