In January, I built and used NorCal Doublets from ribbon cable. I also tried out a 9 to 1 balun with a 50 ft ribbon cable with counterpoise. It just so happens I worked ZS6RC South Africa on 15 meters SSB with the 50 foot wire. I operated in the Pet Rock Sprint with a Pixie Transceiver and the Alexloop. I managed two local contacts.

In February, I got a surprise visit from John W8JER at the SEARS rocket launch in Samson, AL. He was impressed with my AlexLoop and he went on to build his own mag loop. Also in February, I made the trip to the Orlando Hamcation with KK4DKT. My big buy there was a NA4RR Hexbeam. I met up with Kelly K4UPG and attended a QRP talk by W4QO. After the talk I gave a demo of the KX3 and Alexloop.

In March, I supported the Panama City club at the Red Cross Home Expo. I setup in the outside area beside the Red Cross Van and gave a demo of ham radio. It was a SKCC Weekend Sprint that day and I racked up quite a few contacts with the Alexloop. It was this month I discovered the Rapid Deployment Amateur Radio RaDAR concept from Marcus NX5MK. Marcus established the RaDAR America contest and program. This led me to Eddie ZS6BNE's site where I learned how the RaDAR idea got started in South Africa.
In April, I operated my first RaDAR Contest from St. Andrews State Park. I setup in three locations in the four hour period. Movement is an unique aspect of RaDAR. It was great fun. I returned to the park soon after to the operate from Sandy Point.

In June, I did Field Day with the Panama City ARC club. The hex beam was used and also a 40 meter horizontal loop. The ops were outside using my KX3 solely on battery power for the duration.

In July, I had more RaDAR outings including Falling Waters State Park. I also started using the Ham Central Terminal with the KX3.


In August, I set up in Tom WD0HBR's neighborhood in Dothan to participate in the Skeeter Hunt. I also attended the Huntsville Hamfest with Marv KK4DKT. This is where  bought The LNR Trail Friendly End Fed. Saturday Night there was BBQ on Monte Sano setup by Craig NM4T. this was the site for the Tuna Tin Build-A-Thon hosted by Rex W1REX. On Sunday I gave a talk on RaDAR at the QRP forums.


In September, I made a work trip to the Oxnard California area.This is where all my RaDAR preparation paid off. The hotel just happened to be on the beach and there was a nice park next door. I operated in the QRP Afield contest from the park on a Saturday. The following day I operated from the park and setup on the beach in the afternoon. Working the JA stations was a treat. Especially when a JA answered my CQ while I was on the beach. Later that week, I got off early I operated directly off the top of a sand due with the Alexloop. I stay at a hotel near LAX the last night. I stuck the Buddistick out the window and had some surprisingly good contacts. Back at home I participated in the Peanut Power Sprint in the one watt Gober category. I did rather well and placed second peanut to Bobby AJ4KY my friend in Georgia.

In October, I headed up the Jamboree On The Air JOTA for our local scouts. The club setup portable at the site of their camporee. We got some scouts on the air and the club introduced the scouts to Fox Hunting. Also this month I got a few contacts in the Zombie Shuffle setting up portable at night. Then a nice trip to Headland, AL for the Wiregrass tailgate. You can guess it was another portable ops opportunity with the KX3 and the Alexloop.


In November, This was my second RaDAR Contest. It was a return to St Andrews State Park. I wanted to take advantage of the salt water effect. I made contacts at two locations. I loaded up a cart with poles and found it still pretty tough to move across the sand.

In December, I did RaDAR ops including a day in the Apalachicola/St George Island area and a day at Falling Waters State Park.


Rapid Deployment Amateur Radio (RaDAR) has been a central theme for my portable operating. I have have had fun collaborating with Eddie ZS6BNE the architect of RaDAR and Marcus NX5MK who brought RaDAR to North America. It turned out that the Google+ makes it easy to post photos of portable ops. I decided to setup a Google+ community called Rapid Deployment Amateur Radio. It has caught on and there are 160 members now. The community has a global participants including South Africa, Germany, UK, Canada, Australia and the USA. RaDAR America has come along with monthly events and the April and November RaDAR contests .

I must say I have had great service from Elecraft KX3 all year. Wayne commented that the KX3 was designed with this kind of operating in mind. Likewise, the Alexloop is up to any deployment. I often wonder why I pack anything else. The Ham Central Terminal has expanded the KX3 capabilities nicely. The Tenergy LiFePHO4 Battery and LNR Trail Friendly End Fed get honorable mention. All of the gear above fits in my backpack shown below. 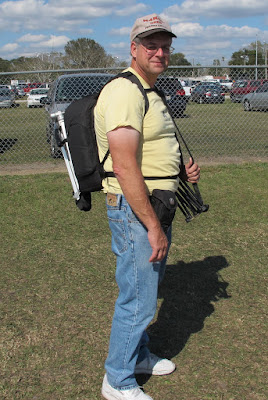 I'd say this was a pretty good year. I made lots of friends through Ham Radio. Thanks to everyone at the other end of the Ether.
Posted by N4KGL at 6:25 PM