My camping plans for Meaher State Park this May at Spanish Fort, AL near Mobile, served several purposes. First, it was an opportunity to catch up with two of my ham buddies from my teenage days growing up in Dothan, AL. The Mobile Hamfest on Saturday was our gathering place. Forrest is a lawyer in Mobile and Curtis is a semi-retired broadcast engineer in Lucedale, MS. This reunion was fifty years in the making. It was very enjoyable to remember our early ham days and find out what these two have been doing since. My third buddy, Lionel, could not come this time, but another reunion is in order for all of us.

Meaher State Park is POTA reference K-1047. I set up my Icom 7100 and the SOTABeams 40-30-20 link dipole made fifty-eight SSB contacts for the park activation. 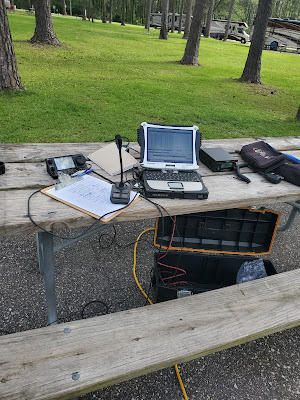 Some research revealed that the Mobile-Tensaw Delta Wildlife Management Area, K-3699 starts right across the highway from Meaher. The Five Rivers Delta Resource Center is part of the wildlife area and that is where I set up. It just happens K-3699 had never been activated. My first activation of K-3699 was a test of the new Alexloop HamPack. I set up at a park bench and ran the Icom 705 at ten watts. I got nine SSB contacts and four CW contacts for the activation. See the YouTube video below for my experience with the Alexloop HamPack developed by Alex, PY1AHD. Later, I returned for a second K-3699 activation and got exactly one-hundred contacts, The bands were pretty good. I did a park to park with G-0022 Langstone Harbour Conservation Reserve in England.
So I guess this camping thing is working out. There is much more camping planned this summer.
Posted by N4KGL at 10:42 AM