This is is one in a series of tests using WSPRlite Beacons to study the Salt Water Effect. The Salt Water Effect is gaining a propagation advantage by placing vertically polarized antennas near the salt water shore.I often setup on the salt water shore with good results. However, now I am experimenting with a WSPR test methodology to quantify the effect. WSPR is Weak Signal Propagation Reporter. 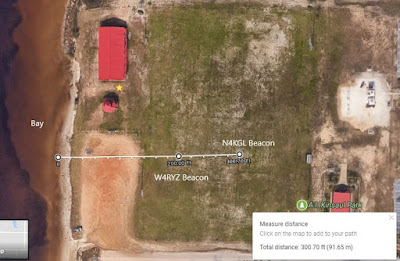 This test was intended to show that two Chameleon F Loop magnetic loops are similar in their WSPR spots. This is a precursor to doing a WSPR test that places one loop at the salt water shore and one inland. I placed my loop and one provided by Bob KK4DIV on the field at Kinsaul Park in Lynn Haven Florida. I spaced them out at some distance from the bay and far enough apart not to have interaction between the two antennas.

Note, I have upgraded the firmware of my WSPRlite beacons so that if they are started at the same even minute their transmissions will be synchronized. This will enhance the credibility of the results. Also, we lost lots of time because one loop was tuned to 30 meters instead of 20 meters. This was Greg's Boo Boo. Of course, it was a good trouble shooting exercise. Thanks to Bob KK4DIV and Cory N4UVR for their assistance on the field!

There were eight transmissions from the two beacons over the course of an hour. Unfortunately, there seems to have been interference on the N4KGL beacon during the second half of the test.

The delta of the average SNR for simultaneous spots is shown above for N4KGL - W4RYZ. The numbers on the header are the deltas in decibels. Eight out of the twelve values are within two dB. Below are the values for the distance bins in kilometers. I will use a view like the one above to gauge the difference in average SNR when I locate one beacon at the salt water shore and one inland in a future test. 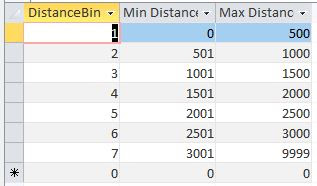 I am doing my data analysis in Microsoft Access. I will refine the queries and views as this effort progresses.