My Dad, Kenneth Lamar Lane, passed on July 12, 2017. He was ninety years of age. The obituary is here. What Dad did for me would take up a book. However, Dad's interest in electronics I can share here. He was not an engineer or even a ham radio operator. His career was at the Post Office.

I believe his first foray into kit electronics was the component stereo systems including Knight Kit amplifiers and receivers. He built several of those kits while on vacation at Panama City Beach. Dad sent my Mom and I, to the beach while he built kits in the motel room. I remember that Dad had an FM receiver before the local station in Dothan made its first FM broadcast. We were tuned in for the first one. There was an audio distribution system in the house. There were speakers from one end to the other.

Dad built several Heathkit color TVs. These kits made leading edge electronics affordable. We probably had a remote control TV long before the neighbors. The grandest kit was the Heathkit Projection TV. The big screen TV is prevalent now, but it was unusual back then. Dad converted our garage to a den by himself. This became the home of the projection TV.

I know I helped out with some of the kit building, but I can't remember which ones. One kit that intrigued me was the Knight Kit AM Wireless Broadcaster. I was broadcasting to radios around the house and tried to foster an audience around the block.


The most exciting kit to me was the Knight Kit Star Roamer. The Star Roamer was my ticket to the world. I listened to the BBC, VOA, and Radio Havana. I heard some amateurs I am sure. I also heard the CBers loud and clear. I figured out that some were near by. I rode my bike around the neighborhood and saw the CB antennas in the yards. I came home and said, Dad, I want to be a CBer. Dad said no you don't. You want to be a ham radio operator.

Dad had a fellow employee at the Post Office Doug Snellgrove who was a ham. At one time, he held the call K4DR. Mr. Snellgrove set me on the course for the novice class license. I passed the test at his house when I was twelve. I was not really knowledgeable enough to get a rig on my own. Somehow, Dad decided that the Drake 2C receiver was a good start. We picked one up in Pensacola. Mr Snellgrove loaned me an Hallicrafters HT-6 Transmitter and many crystals. Magically, a HyGain 18-AVQ vertical showed up in the yard. So I was getting lots of behind the scenes help. 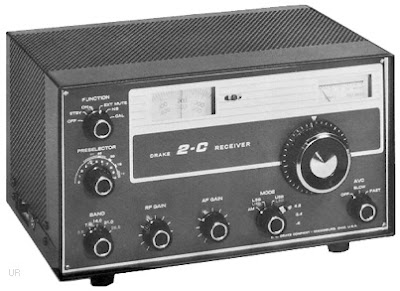 All this ham radio stuff kept me out of trouble during my teen years. It helped me get interested in math and physics at school. I eventually had to decide what my career was going to be. I had an answer Electrical Engineering. Not that I knew what EE was, but I figured it had something in common with ham radio. I was fortunate my parents sent me to Georgia Tech. I got the degree in four years. Dad's interest in electronics and his support was invaluable in setting a good course for my life. I have been using that degree for 40 years. At the funeral, there were many more remarkable stories about Dad. He was a great role model and always was ready to help friends and relatives with those technical problems.
Posted by N4KGL at 9:53 AM