A Tale of Two Hobbies

My QRZ.com N4KGL page has my Mighty Mo rocket photo above. It was the featured profile for a while on QRZ.com. John W8JER of Sturgis, Michigan saw the photo and just had to check our rockets. At the February 2nd Samson AL launch John drove up and parked. I am always encouraging folks to come to our rocket launches. However, we don't usually draw folks from Michigan. John and his wife Michelle made Samson a stop on their way to the Orlando Hamcation. So John and Michelle had plenty of rockets to watch. I launched my 4 inch diameter Thor with a patriotic paint scheme on a 54 mm J415 motor.. 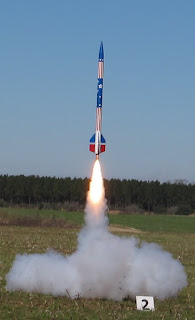 Of course, John and I talked Ham radio. He drives a Ham Radio equipped Subaru mobile. I offered or perhaps  insisted on showing John my Elecraft KX3. So what to use for an antenna? The most convenient is the Alexloop. I setup the loop and we checked out 17 meters and it was active. There was a Michigan station on. John keeps a sked with his friend Jeff WD8PER from Sturgis. So John called up Jeff and he heard the 10 watt KX3 S9 in Michigan. John took the mic and had a chat with Jeff. John was impressed with the Alexloop. It is always fine business when you make a point to point QSO with a friend. 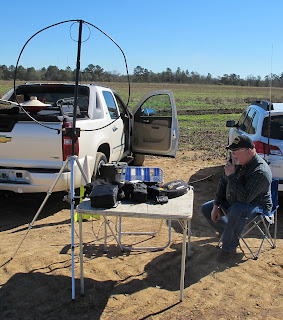 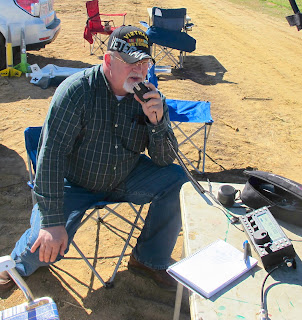 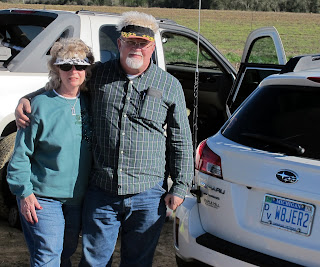 It was nice to meet and make friends with John and Michelle. It was my two hobbies rockets and radios coming together. Look for John with his fuzzy hair cap at the Hamcation. He will have a table there to sell some gear. Perhaps he will buy an Alexloop sometime. Also check out W8JER's page on QRZ.com he has an awesome Hex Beam and tower.
Posted by N4KGL at 7:03 AM