Linda and I took a plane ride from Panama City, Florida to Sacramento, California to visit our daughter Emily in Chico, California the first week of June. I worked in three Parks On The Air (POTA) activations in the valley including Woodson Bridge K-3597, Adobe K-3596, and Bidwell Sacramento River K-1128.  Emily went with me to the first activation so she knows what it is about now. We saw pelicans in the Sacramento River. How about that?

My gear was my Icom 705 and my SOTABeams link dipole. QRP seemed tougher in Northern California than in Florida. It may have been band conditions. The best contacts were to the North/South and not to the East. I got the required ten contacts at each park. I learned to be mindful that the UTC day rolled over at five pm. I had to get ten contacts before the UTC day rollover or after. 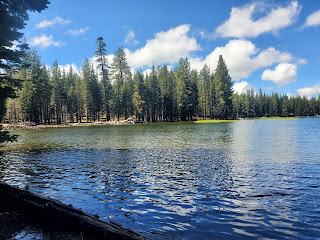 The POTA highlight was a trip to Lassen Volcanic National Park K-0049. There was some drama when I got lost in some rustic territory on the trip to the park. The Garmin GPS wanted me to take unpaved roads. I knew I was in trouble, but after about 45 minutes I came upon two men who sent me in the right direction. I entered the park from the Loomis Ranger station at the North end of the park. It was a short distance to Manzanita Lake where I set up a picnic table to operate. There was no cellular service anywhere in the area so I could not spot myself. It also was a Monday and stations on 20 meters were sparse. However, I got four on SSB and three on CW. With 20 meters waning my hope for the last three was 40 meters. I begged some SSB stations to give me contacts and that completed the ten needed. 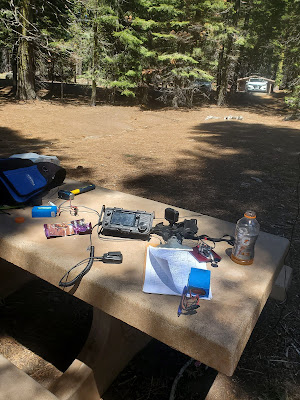 The lake was particularly scenic at 5800-foot elevation. I had daylight to drive the thirty-mile park road to the exit on the South. I saw the snow-capped mountains and the road reached the 8500-foot level so there was plenty of snow there. I saw and smelled the boiling Sulphur Springs on the South end of the park. The park and the trip back to Chico were miles of winding roads. I saw some great sights we don't have in Florida. 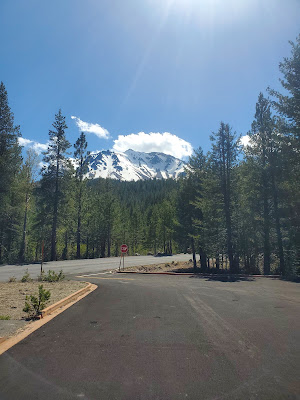