The RaDAR Challenge is very much about making choices. Key choices include the rig/antenna, the venue, and the means of transportation. My choices for the November 7th, 2020 Challenge were:

I chose the Icom IC-705 because it's my new rig, and I better try it out. It weighs a couple of pounds and runs 10 watts. A hundred-watt rig would have made contacts easier, but that is more bulk and weight to carry.

I chose the Alexloop magnetic loop for its small size, quick setup, and rapid band changes. It does not require a tuner. That's a good thing since the IC-705 does not have an internal tuner. Would a dipole have done better? Probably, but it takes more time to set up, and it is hard to have a dipole that is resonant for all bands between 40 and 10 meters. Also, the magnetic loop is vertically polarized on the horizon. That fits in with my choice of venue.

I chose St. Andrews State Park as my venue in-part because it gives me access to the saltwater shore. The saltwater effect will boost your HF signals. That is a good choice if you run low power. This effect applies to vertical polarization, and I have that with the Alexloop.

I chose to ride my bike. The required distance is two kilometers. My rides took about eleven minutes. I strapped the Alexloop case and my tripod for the loop to the luggage rack on the bike. I carried the rest in my backpack.

The goal is to make five contacts and move. Making five contacts with ten watts and a mag loop can be tough when you need them in a hurry. So you have to leverage anything that will help. My leverages included:

I got a little help from my friends. My first contact was a local ham Bob WB4BLX. He found me on 20 CW. My second contact was Myron WV0H in Colorado on the same band. I also worked a couple of friends on two-meter FM Simplex, Frank W4IMH, and Bob N4RJJ. I got a 20 meter SSB call from Bob KK4DIV, who was doing RaDAR in a Conservation Park a few miles away. A RaDAR to RaDAR contact is awesome. I must also thank Dennis WA6QKN for help setting up and logging. It was a team effort.

I used CW for about half of my contacts. CW can help out when you are doing low power portable. It is definitely worth learning if you do QRP. It happened to be the Weekend Sprint for the Straight Key Century Club. They always want my SKCC number.

I took advantage of Parks On The Air or POTA since I was in a state park. I put in some spots on the POTA website. I got a few contacts that way, but not the usual pile-up. Note that it is work to get their grid square when they don't expect to give it out.

I also checked in with the 17 meters group on 18.157.5.  I worked Bud W3FF tricycle mobile and VP2IMI in the Caribbean there.

So frankly, it takes a bag of tricks and good luck to make those RaDAR contacts when you need them. The Alexloop came through. Our reports were sometimes weak but copiable and sometimes S9 on the other end. It is a challenge to break pile-ups with a mag loop. I did not spend long trying. The Alexloop has a special place in my antenna repertoire since it is the most portable of the lot.

My advice is to do lots of portable work, try lots of gear, and see what you like. Eventually, your skills, your equipment, and knowledge of the HF bands will mesh. Then you will be in the flow zone for the four hours and have a satisfying experience doing Rapid Deployment Amateur Radio (RaDAR).

Linda and I decided we would do camping in our retirement which started in March of this year. We now have a twenty-four-foot Coachman Spirit trailer to enjoy. Towing and setting up a trailer has been a big learning experience for me. Starting last Saturday, we camped four nights at Three Rivers State Park on the Florida side of Lake Seminole. Our first trip with the trailer was a success.

Of course, any campsite is a portable operating opportunity. In particular, State or National Parks qualify for Parks On The Air, POTA program. Three Rivers State Park is POTA K-1922. I decided to try the new Icom 705 with the Elecraft KXPA100 Amplifier for this activation. The antenna was the SOTABeams 40-30-20 link dipole.

It turns out POTA has a large pack of hungry hunters. I got several pile-ups going. In particular, the hour before sundown on 40 meters SSB pulled in sixty contacts in one hour. I had 172 contacts in all including nine park-to-park contacts.

My four-hour window for the challenge will start between 1500 to 1600 UTC, 9 to 10 am CST. The venue will be at St. Andrews State Park near Panama City, FL. I plan to take advantage of the saltwater effect on the Grand Lagoon on the Northside.  There are a picnic table and a pier right on the saltwater. It will be any which way I can to get five contacts to allow me to move to the next stop. Dennis WA6QKN will assist.  I'll be riding my bike two kilometers between stops.

My rig will be the Icom 705 and the Alexloop. I will check the high bands for intercontinental RaDAR DX. Eddie ZS6BNE, I see on VOACap there might be a path to South Africa on 10 meters. I do like 17 meters for RaDAR in particular 18.157.5 USB. On CW, I'll try 14.061,18.071, 21.061, and 28.061. Look for me on RBN or Ham Alert. The park is POTA K-1917. Check for my spots at https://pota.us/#/.  I will also be looking for local contacts on HF and two meters FM on 146.565 simplex. I'll give updates on the local 145.210 repeater. Note, I would like your six-digit or more grid square in the exchange.
RaDAR is Rapid Deployment Amateur Radio founded by Eddie ZS6BNE in South Africa. See the RaDAR Challenge rules at http://radarops.co.za/index.php/radar-rules/  Go out portable and give RaDAR a try or chase us RaDAR ops. RaDAR to RaDAR is an exciting goal.
Good Luck and be safe,
Greg N4KGL 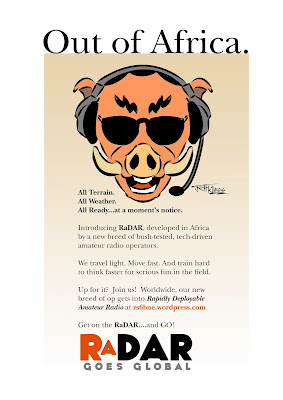