Saturday May 30th, I combined the May RaDAR On-The-Air Meetup and the Red Cross Hurricane Preparedness Event at the Panama City Mall. The Panama City ARC has been participating for several years. 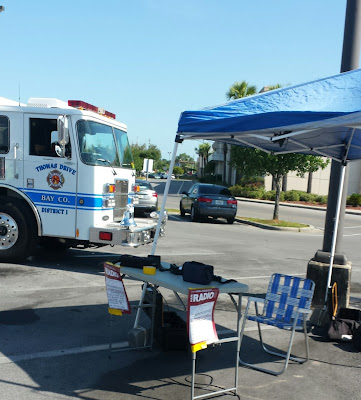 You could say this was a study of how to operate from a mall parking lot. Essentially, I took two facing parking spaces, setup the canopy in one and parked the truck in the other. There was a 31 foot jackite pole rising above the canopy. It had the Chameleon Hybrid Micro attached head high. The 60 foot wire goes to the top of the pole. Then the wire goes horizontal to camo poles off the back of the truck. Two 25 foot counterpoise wires were wrapped around the top of the canopy. 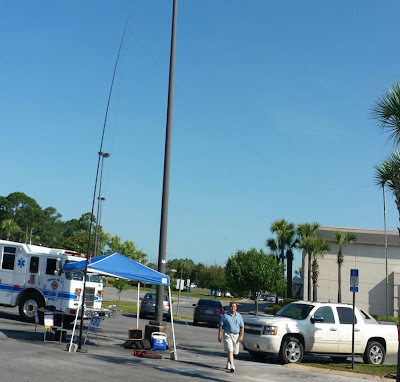 The first two hours of ops were the RaDAR On-The-Air Meetup. Any contacts are good but it is a bonus to work other RaDAR Operators. My grid square was EM70EE24DU. On 20 SSB I worked two local KK4DWC Don and WB4BLX Bob, I had several solid QSOs including N1GYE/W8 at a club station in Michigan, KD0WUF Shawn in Kansas and VE3TCV Mauro. Also got a call from Charlie NF4A who is also local. He said I was spotted on a cluster. I switched to CW as planned and worked Pat NQ0N. Pat is a RaDAR op but was inside due to weather. 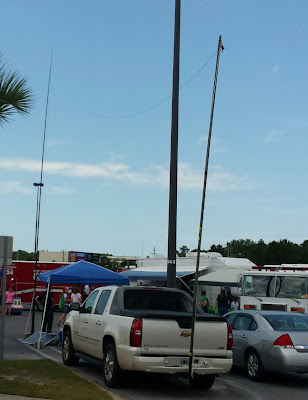 The second hour was on 17 meters. The band was in poor shape. I struggled but was called by K0YO. He also called me on 20 meters possibly. I did snag LY1G Stasy in Lithuania. I switched to CW and worked NT9L. I apologize John I was getting questions from a visitor and was not focused. Since the meetup was over I went to 40 SSB and checked into South CARS net. The net control liked that we were at hurricane preparedness an event. 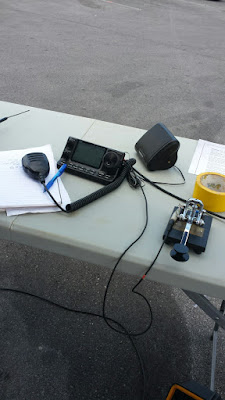 I did use my 100 watt solar panel which replenished the drain from the battery as I operated. I ran 100 watts and I think it would have been tough at 10 watts due to conditions. The antenna did well so I think the inverted L was a good choice. 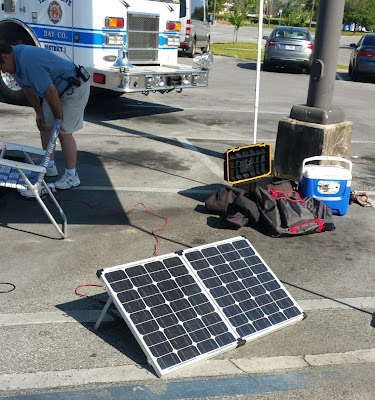 I had a number of visitors. Most were most were intrigued with the code. I met our US Representative Gwen Graham. She already had a good handle on amateur radio for emergencies. I did visit with the other local hams attending. Ron KK4DWE and Melissa KK4SYL held down the booth inside. I felt that this was great prep for Field Day. I wanted to work more RaDAR ops but the conditions did not cooperate.


I am interested to know how the other RaDAR Ops faired! 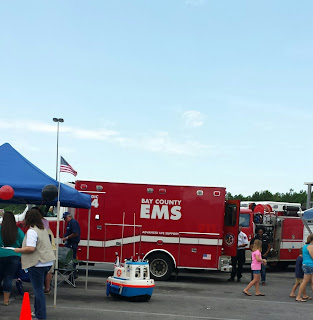 Alternate Power: 100 bonus points for Field Day groups making a minimum of five QSOs without using power from commercial mains or petroleum driven generator. This means an "alternate" energy source of power, such as solar, wind, methane or water. This includes batteries charged by natural means (not dry cells).

Well I have gone for the bonus in past years but you know for a given battery it may have some charge from commercial as well as solar panel. I did read somewhere of a group that used a supercapacitor and solar panel combination to meet the requirements. So I obtained a ultracapacitor via ebay "Ultracapacitor Module Kit" which is a bank of six 350 Farad capacitors. a single cap can handle 2.7 volts. So it takes six in series to have a 16.2 volt bank. There was soldering involved. The post on the caps are thick so a solder gun was required. Thanks to Vic K4GXV for loaning me one.


At first I was rather cautious and hooked the bank to a 15 watt panel. The source must be current limited and the 15 watt solar panel might put out an amp. It took maybe 20 minutes to charge to 11.85 volts. At that point I discharged it with a 12 volt lamp. Now getting bolder I used a 100 watt panel that puts out about 4.5 amps. I had the morning sun and it charged the bank up to 13.4 volts in two or three minutes.

Now let me mention that my understanding of solar panels and radios is that you do not hookup a panel directly to a radio. In fact even with a the solar charger the panel will pass on 20 volts if there is no current draw. So that would not be good for a radio. So it is my practice to use a battery and ensure that the panel never feeds the radio directly no matter how I play with the wires. The voltage of the solar panel clamps down to the battery voltage. Now in this scenario a capacitor bank can replace the battery. I would charge up the cap bank first, then you have the nominal 13.4 volts. The solar charger limits the voltage to the caps like it does for a battery. I found an equation at this link that said for estimating purposes a 2 amp draw for 30 seconds would drop the voltage one volt with a 60 Farad capacitor.


Living more dangerously I fed the KX3 off the cap bank with the solar panel still hooked up. I found the 200 ma receive current is constantly replaced by the solar panel maintaining the 13.4 volts. On 10 watts SSB the voltage drops off to 12 something like most batteries. With the some sun the voltage will return  to 13.4 fast enough that it is like being on a battery. I checked into SCARS on 7.251 and worked Michigan on 17 meters as a test.

This looks good enough for Field Day natural power QSOs. I don't know if this makes sense for anyone's operating style. I do think I could use more fuses on input and output of the cap for safety sake.﻿ The supercapacitors will discharge more rapid than a battery and that is useful for some applications but otherwise it could be hazardous. So be careful if you play with these caps.

Now I'll be happy knowing my five contacts are pure and natural solar for the bonus. Of course, it cost me $70 for the bank. Now for more fun I could use a ultracapacitor cap bank/solar combo for a environment friendly rocket launch system. Hi Hi

Many of our antennas/tuners try to solve the multiband problem. When you throw in the WARC band into the mix you have many bands to cover and you can't count on them being harmonically related. Of course for ARRL Field Day, we don't operate on the WARC bands. I have in the past used the multiband doublet concept. In fact, last year I put up a 100 foot doublet with a SGC 237 at the center. This worked great. However, it occurs to me that a 40/20 parallel dipole with one feedline would cover those two bands plus I could work 15 meters as a 3/2 wave off the 40 meter dipole. I used this combo in the past for SOTA. I do have four Jackite poles that I could get the ends up 30 feet. The center might be 25 feet supported by camo poles. I could add a 10 meter parallel dipole but that is too cumbersome. Well, I just happen to have two Bravo 7Ks verticals and I could setup a 10 meter parasitic array for fun.  So 40/20/15 and 10 are covered. Hey maybe I just won't worry about 80 meters. We will see.

This year I am operating with the Panama City ARC at the Bay County Florida EOC. There is an inside station and I set up an outside station. The inside station will use a NA4RR hex beam that covers 20 through 6 meters. This year Phil has a a trailer tower combination that can get the hex beam up about 30 feet.. I think this will be the A bomb for those bands. That antenna will be for the inside station.

The United States Islands Awards Program, USI, covers saltwater and inland fresh water river or lake islands of the fifty (50) states of the United States and U.S Territories or Protectorates. USI was formed to further enhance "island chasing" that has become so popular on the amateur radio bands.

That said, US Islands had a One Day Getaway event on May 9th.  With a little checking Shell Island near Panama City has been activated previously and has the designation FL401S. Shell Island is uninhabited and is not accessible by car. However, it is popular with boaters and sun seekers. If you don't have a boat you can go over on a Shuttle boat like I did.

I always wanted to operate RaDAR on the island and the USI Getaway was the impetus to make it happen. The good news for RaDAR ops is the skills and equipment are very helpful for other programs such as Islands, SOTA and Field day. Island operating can make you appreciate a DX expedition. There is no infrastructure on the island no shelter, no snack bars and no rest rooms. What you bring is what you have.


I did lots of looking at the island on Google Maps and saw several places that would give me a shot over saltwater on the North bayside. However with only about five hours on the island, I could not do much walking as the two way trip would eat into the operating time. In short, I set up on the beach on the Gulf side which has a view to the South.  I find no matter how much research you do it does not replace being on the site.

I took quite a bit of gear but it worked out for a short walk. I got good use of my beach cart that doubles as a table and my Sportsbrella. For antennas, I chose a dipole for 20 meters since that was going to be the main band. I used a 31 foot pole for the center and 20 foot poles for the end. If you have to count on an antenna no one can doubt you for picking a dipole. To cover the other bands I picked the Chameleon Hybrid Micro with the whip. Being a vertical, it should get some saltwater effect on the beach and it is easy to change bands. My rig was the Elecraft KX3 with a 10 amp-hour LiFePO4 battery.

The contacts went well.  I had a run of 16 contacts on 14.262 right off the bat. That was sweet. The chasers were glad to have Shell Island represented. Over the day I worked five other US Islands. Two of my contacts were fellow RaDAR Ops Ron W2RON in Vermont and Mickey NY2MC in New York. They were out portable also. When things slacked off, I checked the other bands on the vertical. I got Barbatos Island and Russia on 15 meters SSB. I tried 40 meters SSB on the vertical I snagged Peachtree City, Georgia which made me happy. I also got K4GXV and WB4BLX in Panama City on 40. I threw in three SKCC stations on 20 CW. My last contact was on 20 meters SSB with KE5RS on Goose Island TX using the vertical. So I had 32 contacts over about three and a half hours. That is respectable for 10 watts I'd say.


So US Islands can be in my mix of operations. I think it is a great program. There are several islands within a few hours drive from Panama City. Likewise, I am a Shell Island veteran now and can include it in some future RaDAR adventures.