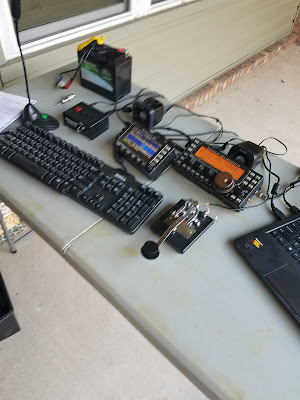 The Elecraft PX3 is excellent. Amazing how it integrates with the KX3. In my opinion, it gives you more capability than the spectrum scope on the Icom 7300. I like the way the markers work to let you QSY. Of course, there are buttons and features to learn on the PX3. And yes you can hook up a keyboard to the PX3. This enables you to type or use text macros for CW or PSK 31. This leverages on the built-in capability for these modes in the KX3. It is cool that the KX3, PX3 and the computer logging program all talk without any issues. 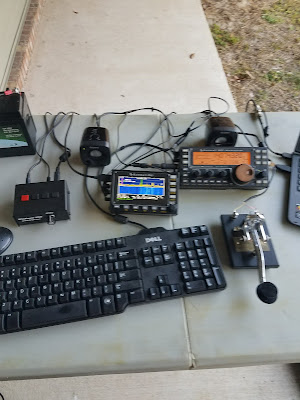 I also tried using the N3FJP software to generate CW for the first time. I bought a used WinKey box on eBay. The N3FJP software uses it to key the KX3. The WinKey also lets you hook up a paddle or straight key to go manual if you like. We will see how that goes. I am leaning toward using the PX3 keyboard do most of the work. That way I can have someone else assist with the logging on the computer. 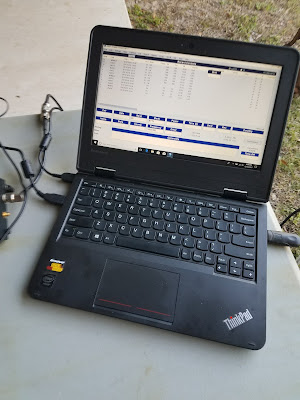 I guess you can tell this is overloading my 8-bit brain. It will take some practice in the field to burn it in.. I have some opportunities operating portable for ARRL Grid Chase starting New Years Day 2018. Winter Field day is January 27/28. I have a reservation at a campsite in Falling Waters State Park near Chipley Florida. I have some friends planning to share the experience including Bob KK4DIV who is camping in the same park.

Dreaming of a Winter's Day

Those of us who can't get enough of ARRL Field Day will be out the last full weekend of January operating Winter Field Day. I have an outdoors location reserved at Falling Waters State Park near Chipley, Florida. We usually get a break on the cold weather in Northwest Florida, but there are exceptions. 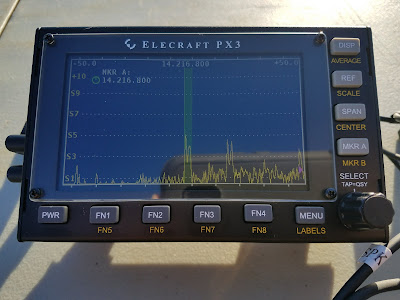 I operated class 1B 2 operator for ARRL Field Day last June. It was a great experience. I am no seasoned camper but I made it through two nights. I was joined by Rick NZ2I for one night and he also was the camp cook. The antenna I built for the confines of the camp site was a big success. It is a 100 foot loop deployed 30 feet across and 20 feet vertical 10 feet above the ground. I designed it to fit in the camp site that will park a 30 foot RV. I have used it several times since Field Day and it performed well. 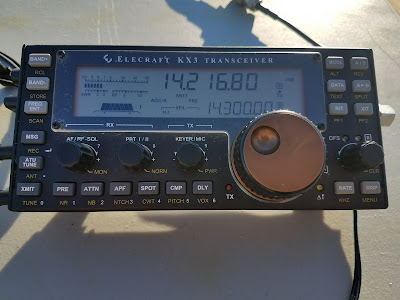 I will be at the same camp site and use the same loop antenna as last FD,  but I will go for the QRP category this time. I just noticed that WFD rules allow 5 watts CW and 10 watts peak on phone and digital. I would really like to see ARRL adopt that definition. I have in mind to also go QRP in the June 2018 ARRL FD. So WFD will be a test of my QRP station. 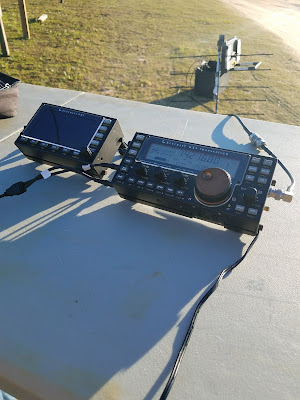 My choice of a WFD QRP rig is my Elecraft KX3. I decided to dress things up and add a Elecraft PX3 spectrum display and a heat sink for the KX3. I took the KX3 and PX3 for a test drive Sunday and I am very impressed with the PX3. I am interested in PSK-31 for Field Days. I have done very little. The KX3 built in support for PSK is enhanced greatly with the PX3 spectrum and waterfall display. Also, the PSK text is decoded in the text area of the display. I can see PX3 much better than my laptop. I brought up FLDigi on the laptop and my eyes don't jive with that tiny text font. 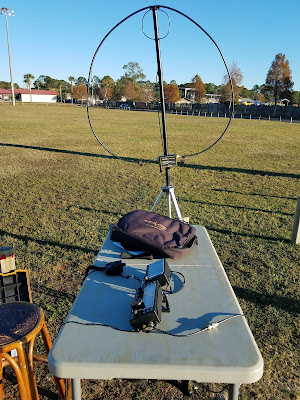 So my next step will be hooking a keyboard to the PX3. It will do the text macros and such for PSK as well as CW. I will also install the heat sink and do the temperature compensation. I will have a few outings before WFD to get comfortable with the KX3 and PSK. The computer solutions for PSK are great but I think the Elecraft approach will be fine for adding some digital contacts on WFD.

My friend Bob KK4DIV will have a camp site across the park road for WFD. Dennis WA6QKN and Chris VA3ECO have plans to come and play. It will be fun! I enjoy planning phase for these events. .

My WSPR Beacon Rocket is Launched into Near Space

I launched a WSPRLite beacon on my hobby rocket at the Dec 2nd rocket launch in Samson, Alabama. Weak Signal Propagation Reporter, WSPR, is a tool to study radio propagation. WSPRlite is a stand-alone WSPR transmitter or beacon. There is a network of WSPR receivers worldwide that post spots of beacons to WSPRNet.org. I dreamed up an experiment to compare the reports of a beacon at altitude with a reference beacon on the ground. I chose the 20 meter HF band for this experiment.

Question: What is the effect on the propagation of 20 meter radio waves using a half wave vertical at a significant altitude over ground level.

Discussion: A rocket can be used to put a beacon at altitude for a short time. The rocket will ascend to an altitude of at least 1000 feet quickly and slowly descend to ground level under parachute. If I am lucky the chosen rocket will be elevated for the 2-minute transmission cycle of a WSPR beacon. The choice of rocket/rocket motors will affect the hang time.

I have a rocket with a payload bay.I will load the payload bay with:
USB Powerpack
WSPRite Module setup for 20 meters
LNR Trail Friendly End Fed matchbox with a half wave (32 ft) wire exiting from the bay.

Setup a Bravo 7K vertical as a reference antenna with a WSPRLite
Setup the rocket payload WSPRLite with the half wave wire extended vertically to a support pole.

Start the WSPR Beacons simultaneously on even minute at 20% duty cycle
Run the beacons for at least an hour.
The WSPR system of receivers will establish the relative SNR delta between the two antennas.

Setup the WSPRlite beacons for full duty cycle
Start both beacons at an even minute.
Setup the rocket on the launch pad with the antenna draped loosely on the ground
Launch the rocket about 10 seconds prior to an even minute.
The WSPR system of receivers will establish the relative SNR delta between the two antennas.

Capture the data from the WSPR database. See if the SNR delta between the two beacons is greater at altitude than during the ground calibration.

I checked out of the gear at my home the day before the launch. Here is a video

At the launch, I ran a comparison of the rocket's beacon callsign N4KGL to a Bravo 7K vertical callsign W4RYZ on the field. The comparison report is at this link. Then, I prepared the PML Arial Rocket with an Aerotech I140 motor. The WSPRLite, a USB power supply, and a LNR Trail Friendly End Fed matchbox were in the payload. A 32-foot wire attached to the matchbox extended through a hole in the side of the payload bay.


The WSPR beacons transmit on a two-minute cycle starting on even minutes. I usually set the beacons for a duty cycle of 20 percent. If you start two beacons at the same time they will be synchronized. I thought I could set the duty cycle to 100 percent. That was not the case. 50 percent is the max.

With a 50 percent duty cycle, I could not predict exactly when a transmit cycle would start. There seems to be some randomness at play. That made pushing the launch button at the right time a bit difficult. So we waited until an even minute came to hear the beacon tone start on my KX2. John Hansel, the Launch Control Office pressed the button with perfect timing.  The rocket assent and decent under parachute were, fortunately, only slightly short of two minutes. The rocket landed safely on the field. The comparison report for the flight is at this link.

I have had experience doing antenna comparisons during my study of the saltwater effect for vertically polarized antennas. I export the spots data from the SotaBeams Dxplorer.net website.  Then, I import it into a Microsoft Access database.  I developed the Spots Database to do the calculations and generate reports. The output is very similar and agrees with the results Dxplorer,net provides. However, those results eventually slip out of the time windows that the website uses. I can filter specific time periods for comparisons.

I enjoy getting empirical data in these experiments to examine what I understand about antennas and propagation. This experiment was mostly for the fun of it. I may try kites or balloons to elevate a WSPR beacon in the future. WSPRlite is exceptionally easy to use. It is reliable even in near space. All this is a good exercise for my interest in rockets, radios and relational databases. Thanks for reading!