The April RaDAR Challenge coincides with the Florida State Parks On The Air Contest. The FLSPOTA Contest is sponsored by the Lakeland ARC. Thanks to Matt NJ4Y who is one the organizers. RaDAR can play well with other events like the FLSPOTA Contest. My usual venue for RaDAR is a Florida State Park anyway. The first Saturday of April last year was perfect weather. This year the forecast for rain got worse the closer we got to the day. I even considered bailing out. However, why not start and see what happens. The forecast for rain was correct by the way.

In Northwest Florida, we are blessed with many state parks. Since RaDAR encourages movement, we moved by vehicle and visited five parks along the coast in succession.  My buddy Dennis WA6QKN is on my RaDAR team so we braved the rain together. We operated out of the van. I call it Sonic Style because we are like the two guys in the Sonic commercials.

When it is raining, you want to minimize your antenna setup time. The antenna of choice for this situation was the Chameleon whip and the 5-to1 transformer. It was mounted to a four-foot pipe plugged into an umbrella stand base.The Icom 7100 in the van had an LDG IT-100 tuner that let us operate multiple bands the Chameleon vertical. Although we know this is not the best antenna for 40 and 60 meters, we still made contacts on those bands.


Here are some notes from our stops:


Dennis and I felt we had a full day of ham radio fun despite the adverse weather. Thanks to chasers like Chris VA3ECO that tried but did not find me. We listened to a QSO Today Podcast on the way home. The podcast was Episode 168 with Dennis Verrecchia N6KI about Army MARS during the Vietnam War. Dennis WA6QKN in the van with me shared his own story of setting up phone patches for operators in Vietnam to the US while he was stationed in Guam. 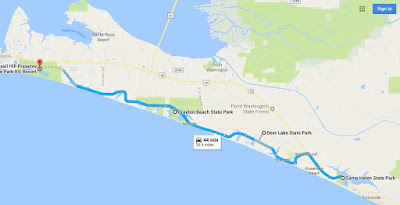