Dennis WA6QKN and I took a trip to the Pensacola, Florida Hamfest on Saturday. I spotted a Hallicrafters tube receiver that I could not pass up. It was very clean and had the back and bottom in place. It looks like a Hallicrafters S38-D. But it is actually a 5R10A model. I picked it up for only $35. 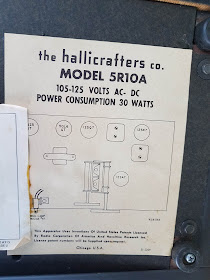 It will be an adventure checking this radio out and seeing what restoration is needed. It is likely to need the electrolytic capacitors replaced. The radio is a 5 tube AC/DC type with no transformer. An AC/DC radio has no power transformer, one side of the power line could be at (or near) chassis potential and if any metal part of the radio comes in contact with you, a shock may result. I have picked up a VIZ ISOTAP II from eBay which is a tapped transformer and provides and isolated output. This will reduce the shock hazard. If I touch the chassis and ground in the shack, it won't kill me. Plenty of caution is in order and this can be helped by replacing the two wire cord with a three-wire cord with ground.


This was Suzy's first hamfest and she really enjoyed it. Other hams from Panama City attended. Jim K4LIX had a vendor table. Cory N4UVR and Phil N4STC also attended.  Phil N4STC won the main prize, an Icom 7300. Congrats Phil! Dennis and I took w side trip to Fort Pickens on the way home. Perhaps there will be some future portable operations there.