Down to Earth Antenna

I had seen a post on Markus KD0JKM's Blog about a grasswire antenna. So why not give it a try. I had some left over ribbon cable to make a 100 ft loop. I used two conductors in parallel. It is easier to handle that way. I laid the loop on the yard directly on the grass. I called a few stations and did not snag them. But I found I had some Reverse Beacon spots.

Then I raised the loop using 20 ft poles and make a contact with Wink WA8KOQ in Sevierville TN. Now that was nice because I later setup the loop at about two feet off the ground. I found Wink on the air and he gave me the same 579 and said about the same as first QSO. So I'd say the two foot high loop does pretty good. I got a number of RBN spots for it on 20 and 30 meters and I worked WA2HMB Don in SC on 40 meters. I think this qualifies the two foot high loop to be in my catalog of portable antennas. The grasswire loop is inviting me to get a actual contact.  Markus did make some contacts on his that was six inches above the ground. I could see using Reverse Beacon Network as a great tool to experiment with grasswire antennas. I can imagine some emergency scenarios that you have to make do with no supports. I read that in WW1 if the antenna supports were destroyed  they could still communicate with antennas on the ground. 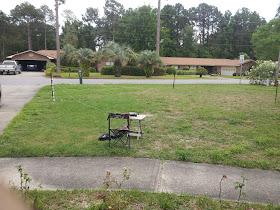 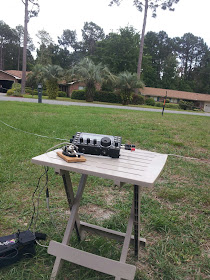